Cleaner and faster dining with Trayable 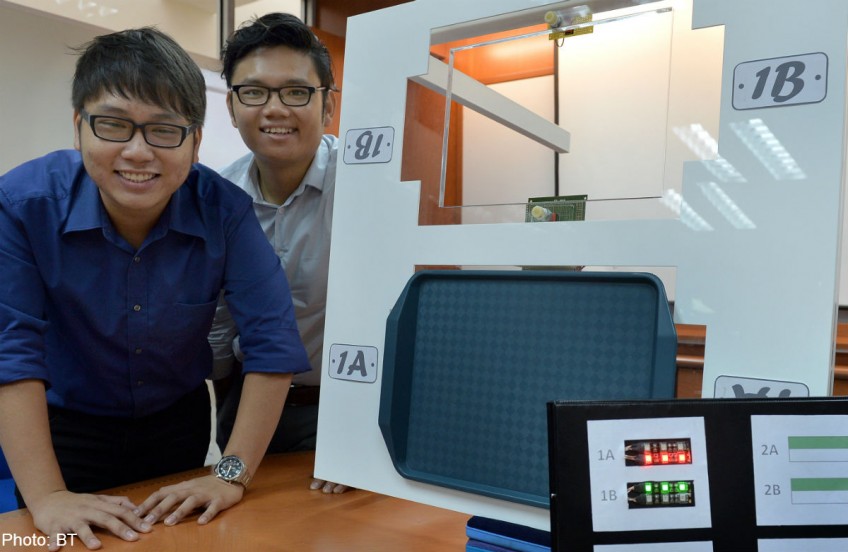 Innovative: Mr Kam (left) and Mr Zulfadhli are part of a team of NTU students who invented Trayable. It has a laser-cut acrylic table top designed to help reduce food spillage.

SINGAPORE - If you have ever bemoaned the difficulty of finding a clean, vacant table during the lunch rush hour, then Trayable might just be the answer for you.

Created by a team of engineering students at Nanyang Technological University (NTU), Trayable is an integrated table system designed to overcome this problem, commonly faced by diners during peak meal times at food courts and fast-food outlets.

"We got this idea at a hawker centre," said Kenneth Kam, 22, a second-year aerospace engineering student at NTU.

The main reason for the lack of tables is that the cleaners are unable to clear the tables in time, he explained.

The Trayable system incorporates a laser-cut acrylic table top in which portions of the table top have been removed.

This creates gaps for conventional plastic food court trays to rest snugly and encourages diners to eat within their individual trays, rather than have their individual dishes placed on the table.

This reduces food spillage and tables can be cleared faster as well.

Although half of the problem has been tackled, the issue of it being difficult to identify empty seats during peak hours remains.

For this, the Trayable team devised a wireless system comprising two sets of transmitters, which will be activated whenever a tray is placed on top of the table, said Muhd Zulfadhli Hairi, 26.

Sections of an LED board, which can be placed at the entrance of the eatery, will then change colour according to whether a particular seat is vacant or occupied.

The underlying concept of the Trayable system is similar to that currently being used in carparks, allowing visitors to tell at a glance if a particular slot is available or not.

The idea's potential was well-received, with Trayable coming in second place in its category at an engineering innovation design competition organised by NTU earlier this year.

The system has not been deployed for practical usage yet, but the team is already thinking of how the Trayable prototype can be adapted to different real-world situations.

For example, in a steamboat restaurant where diners tend to share many dishes across the table instead of using individual trays, Mr Zulfadhli said that the team might be able to "do up a different kind of tray mounting on a different configuration of the table itself".

The initial Trayable prototype cost $700 to build, which was mostly incurred from having to get a third party to laser-cut the acrylic table top because NTU did not allow the team to do the modifications in the school workshop.

However, if large-scale production is really in the Trayable system's future, then production could be outsourced to factories in China at lower cost.