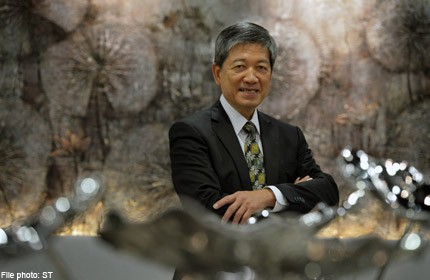 The Crystal Jade restaurant group is spreading its wings beyond Asia: It is opening a restaurant in San Francisco early next year.

It is expected to open in March next year at the Embarcadero Center in San Francisco's financial district. The complex has five office towers, two hotels, shops and restaurants.

Mr Ip, 64, tells Life! that the restaurant will be at Embarcadero 4, with a grand entrance on the ground floor leading up to a fine dining restaurant, a casual alfresco dining area and a bar. It takes up 20,000 sq ft of space in all, and will seat more than 300.

The outdoor dining area boasts views of the wharf and a beach, and will have a transparent, removable roof so that diners will feel comfortable on days when the weather is cooler.

He adds that he had gone on an IE Singapore mission to New York about four years ago, but decided against opening a restaurant there.

"The laws and regulations there are too complicated."

But with help from ChinaSF, a public-private partnership between the San Francisco Center for Economic Development and the City and County of San Francisco that supports business exchanges between China and the Bay Area, Crystal Jade found a partner to open in the West Coast city. IE Singapore helped the group in doing market surveys.

Mr Lee Yee Fung, group director for Lifestyle Business at IE Singapore, says: "Globally, the US is one of the most competitive and sophisticated markets for F&B concepts.

"Crystal Jade is a good example of a Singapore F&B company that has consistently brought top notch quality and innovation to the Chinese cuisine scene over the years.

"The Asian cuisine market in the US is an increasingly important market segment, expected to reach US$29 billion by 2016."

He adds that Crystal Jade's entrance will tap into the city's growing preference for authentic Asian flavours.

The restaurant will serve regional dishes from south of the Yangtze River and diners can expect dishes from Sichuan, Jiangsu, Hunan and Zhejiang.

Cantonese roast meats are also on the menu and there will be a dim sum brunch on weekends.

Some of the group's chefs in Singapore will be posted to San Francisco, with the rest of the staff, including the restaurant manager, recruited there.

This newest venture will add to the 117 eateries the group has across Asia. It is a household name in Singapore, with 53 restaurants that regulars return to for its consistently good Chinese food.

The first Crystal Jade restaurant at the former Cairnhill Hotel was opened in 1991 by Mr Ip's brother-in-law Alfred Leung, who left the group in 2004 to start his Imperial Treasure restaurant group.

Since investing in Crystal Jade in 1992, Mr Ip has grown the business.

Aside from its restaurants here, it also has 32 in eight China cities and 32 in Indonesia, Japan, South Korea, the Philippines, Thailand and Vietnam. The group is also looking to open in India.

Mr Murad, who is originally from Lebanon, has lived in San Francisco since 1975. In addition to developing residential and commercial projects, he also owns Medallion Steakhouse au Naturel in Burlingame.

Mr Ip says that he has checked out the competition over several visits to the city.

"We have better food," he says. "The ambience of the restaurants there is mostly very old-style Chinese. We are going to offer diners really good food and fine decor."