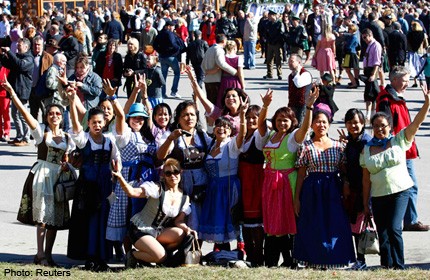 MUNICH - A decade ago, waitresses at Oktoberfest were the only ones in dirndls, the Bavarian peasant-inspired, corseted dresses featuring white blouses and coloured aprons, and trendy Berliners wouldn't dream of dancing to oompah music in public.

Now, Munich's annual beer festival is a sea of traditionally-clad tourists, with revellers from as far away as Canada, Mexico and Iran donning dirndls or the equivalent outfits for men - lederhosen and checked shirts.

"I wanted to be part of the local atmosphere. Everyone was talking about it," said Lindsey Zhang, a 20-year-old from New York who is studying in Paris. She came to Oktoberfest with her friend Marina Teixeira from Sao Paulo. Both women bought dirndls near the Oktoberfest tents for about 50 euros.

"Everybody told me it would be nicer if I wore it," Teixeira said. "Otherwise you'll look like a tourist."

Pippa Middleton, the sister of England's Dutchess of Cambridge, wore a dirndl this week at a festival in Austria.

This is not the first time that "Trachten," as the traditional clothes are called, have become trendy. But today's revival is the most pronounced, said Simone Egger, a professor in folklore and ethnology at Munich's Ludwig-Maximilians-University.

"It's taken on a whole new dimension," Egger told Reuters. She said globalisation had created a desire for people to seek out local specialities.

From a horse race held as part of the 1810 wedding celebration of Bavarian King Ludwig I, Oktoberfest has grown into a 16-day event where millions descend on the Bavarian capital to down litres of beer, eat roast chicken, sausages and pretzels, and dance on benches to brass bands.

Copycat mini-Oktoberfests have sprung up in other German cities, European capitals like London and Dublin and across the United States from Seattle, Washington to Columbus, Ohio. Websites like mydirndl.com import clothes from Germany and Austria to help.

"It's a community of people celebrating heritage, enjoying themselves and bringing culture and history into their lives,"said Floerchinger, an American with German roots.

Berlin-based brass band Die Wilden Buben (Wild Boys) are riding a wave of enthusiasm for all things Bavarian. They are booked solid for September and October.

"People are just really into the folk music and customs of Bavaria right now. They just can't get enough of the Oktoberfest stuff in Berlin," said Markus Hoffmann, the band's manager.

Munich's traditional Trachten specialists like Loden Frey and Angermaier sell a range of dirndl styles, from around 60 euros (S$100) for a basic version to 1,000 euros for a couture silk number. Fashion houses like Hugo Boss, Esprit and Escada have their own collections.

"It's a clear trend, as a retailer we have to grasp that," a spokesman told Reuters, adding that shorter skirts and lace covered aprons were especially popular now.

Underwear maker Triumph, whose corsets and bras are worn under the figure-flattering dirndls, says sales are improving as Trachten are donned beyond Oktoberfest.

"Also it's being worn by people of all ages at other events like wine festivals," a spokeswoman said.

Corporate Germany is on the bandwagon too.

Lufthansa international flight crew wear Trachten on selected flights from Munich in September and Adidas has even designed an away kit for the Bayern Munich football team based on the traditional dress.

"Everybody wants to take part," Professor Egger said. "It's a way of sharing a regional connection and its become a consumer event."