BENTONG - Musang King at RM30 (S$9.80) per kilo! What a steal for durian lovers who swarmed the second day of the durian carnival here.

An overcast sky and the sweltering heat did not stop folks from thronging the open air stalls as the Malaysia International Durian Cultural Tourism Festival here drew to a close yesterday.

Price slashing was easily the biggest reason why the crowds were still flocking at the stalls despite the threatening sky.

Some sellers had marked down the price to as low as RM30 per kilo for the Musang King variety that can easily cost between RM70 and RM100 a kilo on a normal day.

"You can never get this price here nowadays. Most of the Musang King durians go to China and whatever is left will be very expensive," said an elderly woman who was manning a stall selling bath towels at the Bentong morning market. 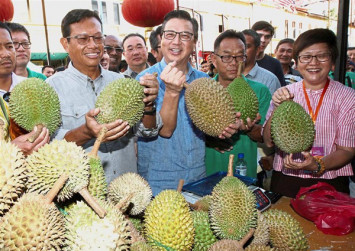 The Musang King durians were priced at an average of RM50 per kilo at the start of the festival on Saturday.

While the two-day festival gave another boost to the image of the King of Fruits in the eyes of the world, farmer Stephen Chow said it was also an opportunity for locals to enjoy the fruit at an affordable price.

The 36-year-old, who also produces durian-based products like ice cream and pastries, said the Musang King variety is very much sought after and that has made the price shoot up in recent years.

"The pricing is controlled by the supply and demand for different species of durian," he added.

For instance, a cup of his Musang King ice cream that is equivalent to 1.5 scoops is priced at RM13 against RM8 for the D24 species ice cream. 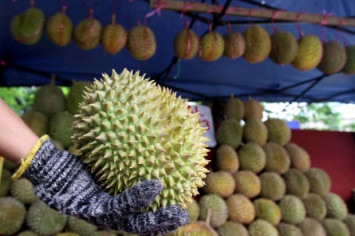 "Business is good during weekends, public holidays and school holidays because of the influx of tourists," he said.

Singaporean visitor Esther Lim said she had not seen the Musang King durian being sold at such low prices elsewhere.

"Not only is it cheap, it is also fresh from the orchards nearby," said Lim who came to the carnival with her husband, their baby and her parents.