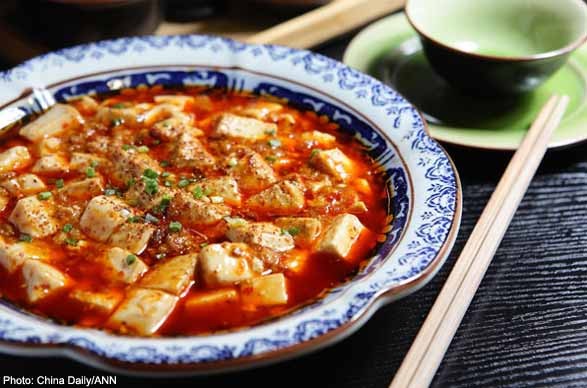 "I wish time to pass slowly so that I can enjoy more of the food and culture here in Chengdu," says Raymond Greene, the new US consul general in Chengdu, capital of Sichuan province.

Greene says he fell in love with the spicy local food as soon as he took office in Chengdu in September.

"One of the greatest pleasures of living in Chengdu is the cuisine. In my opinion, it is the best in China. When I'm away from Sichuan, within a day or two, I start getting pangs for ma la (spicy)," he says.

In July, during her state visit to China, German Chancellor Angela Merkel visited a Sichuan restaurant and learned how to cook kung-pao chicken, a famous Sichuan dish made with chicken, peanuts, vegetables and chili peppers. She also bought some seasonings for Sichuan cuisine at a local market.

"The first impression of Sichuan cuisine to many people is spicy, while in fact, 70 per cent of dishes are not," says Peng Ziyu, a 70-year-old chef, who served Sichuan dishes to former French president Jacques Chirac during his visits to China.

Peng says Sichuan cuisine has a variety of flavors, including sweet, sour, spicy, bitter and salty, which could satisfy different tastes from all over the world. "People may not like every single dish, but they are sure to find some they will enjoy."

Peng says the various cooking styles of Sichuan cuisine also enable it to make use of all kinds of foods from different parts of the world.

During a recent event for trade and economic co-operation between Chinese and US cities held in Chicago, chefs from Chengdu served three dishes－cabbage, cod and beefsteak－at a pre-dinner cocktail party.

All of the ingredients were bought in Chicago, and the dishes looked the same as Western-style ones, but they were prepared using Sichuanese cooking methods.

Sichuan cuisine expert Xu Liang says this regional cuisine is one of the most diverse because it is a product of migration.

More and more Sichuan restaurants have opened in the United States, Peng says, noting that some of his students have opened restaurants in New York, Washington DC, New Jersey and Chicago. Most of the dishes are slightly adapted to suit local people's taste. But some of the classic dishes are not－such as mapo tofu and boiled beef.

"In fact, more foreigners are getting used to the original flavor of Sichuan cuisine," Peng says.

"There is definitely a trend toward eating authentic food. Increasingly, restaurants realise that people from the US are interested in authenticity," he says.

Xu suggests that Sichuan cuisine should pay more attention to nutrition and health so as to be widely accepted by foreigners.