Durian abuse? You might be shocked to see what they do to the king of fruit

The tropical durian is still an unfamiliar fruit to many as a new video shows how an American grandpa went to extreme lengths to cut open its tough shell.

As the clip went viral on YouTube, another case of durian 'abuse" cropped up on Facebook - Thai durian seller shaved its thorns off for those who don't want to be pricked by it.

Professional prankster Michael Green wanted to film his dad in another one of his insane reactions when thrown into bizarre situations that he arranges for his popular 'reality' Angry Grandpa Show on YouTube.

When the durian proved to be a hard nut to crack even with a katana, a super-sharp Japanese sword, angry grandpa went into hysterics as he chopped and stabbed the pricky fruit on a dining table.

Aficionados of the fruit would be shocked and amused at the same time to see how the bearded man continued to hack the fruit furiously with the bigger sickle sword.

His futile attempts frustrated him even more.

After grandpa managed to force open a segment, he took a piece to try. That was when all hell broke loose.

He puked, cursed and swore, and then went back to butcher the durian as if it's a scary beast that needed to be decimated at all costs.

The durian didn't lose the battle - most pieces of the fruit were left untouched and fearsome grandpa turned into a wimp as he scowled in pain when pricked by the thorns.

Refusing to concede defeat, he grabbed the husks and tossed them on the table, which probably suffered serious damage in the course of his madness.

Maybe American grandpa might transform into an angel in an anger management session with non-threatening but weird-looking durians sold at one popular stall in Hua Hin, Thailand.

Making it easy for buyers to take the fruits home, the stall is happy to dethorn the fruit for them.

Durian purists might find it all wrong to deny the king of fruits its pricky armour but foreigners and tourists visiting the seaside town are likely to welcome the move.

Secretly, don't we all hate the thorns just like how we would snip the pricks off a fresh stalk of rose?

Anyway, the shorn durians still looked kind of strange with unsightly bald patches as if a crew cut had gone horribly wrong. 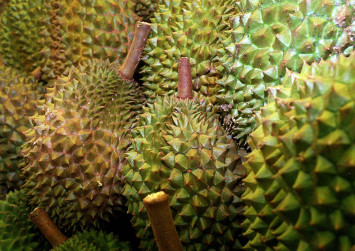 Read Also
Facebook video likens smell of durian to feet, not everyone is happy about it 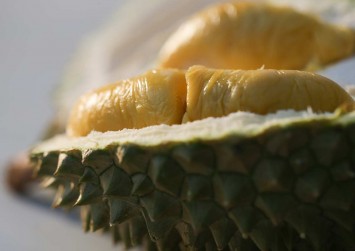