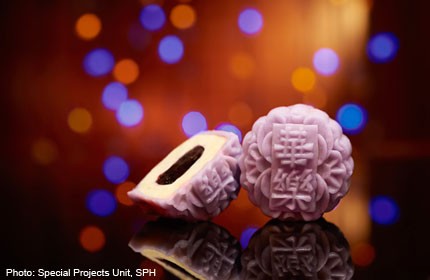 SINGAPORE - Fusing eastern and western ingredients is the way forward as traditional flavours do not always appeal to the younger generation of mooncake lovers.

Mr Shigeru Akashi, director of Food & Beverage, Mandarin Orchard Singapore says: "We need to keep up with the everchanging tastes of the younger generation who are on the lookout for unconventional flavours."

Mr Daniel Tay, chief executive officer and founder of Bakerzin says: "The use of Western ingredients in mooncakes is a necessity in this day and age. Singaporeans are very well-travelled and they are always seeking something new and interesting to excite their tastebuds."

Getting the right texture is often a challenge. Chef Evans says: "Most importantly, we must ensure that the Western ingredients blend well with white lotus seed paste, which has its distinctive flavours and texture. Apart from that, the ingredients will also have to go well with the snowskin, and they will all have to taste good when combined as one."

This explains why the team of chefs at Singapore Marriott took six months to come up with new mooncake creations.

The most challenging is the Mango with Yoghurt Filling Snowskin Mooncake because the chefs had to create the filling from scratch as white lotus seed paste is not used.

He says: "We managed to find the perfect consistency by adding cream cheese in the yoghurt, making this one of our favourites this year."

Another creation - Silk Road of Spices or Mung Bean Paste with Orange Ginger Truffle - is a perfect marriage of East and West. After several experiments, mung bean paste was used to replace the usual white lotus seed paste, complementing the ginger yet not overpowering it.

For Mandarin Orchard, Mr Akashi says: "We took two months to work on the new ingredients. The team of chefs experimented with a total of more than 15 ingredients and had a few rounds of tastings with the mooncake community before deciding on the mooncake flavours."

Marina Bay Sands' executive pastry Chef Ryan Witcher who likes to work with chocolate, says: "The entire process of creating a new mooncake flavour took about three months. We experimented with lots of tropical fruit flavours, such as durian, jackfruit and banana.

"We tried and tested numerous recipes and taste combinations to ensure that the ingredients work well together before testing it on a tasting panel to select the final one."

The process took about three months and the end-result is the Go Green mooncake.

Encased within a fragrant pandan snowskin is a delectable filling of Javanese chocolates, caramelised bananas and cashews that is big on texture and bite.

However, his one regret is not being successful with coconut and hopes to revisit the ingredient next year.

Taking a leaf out of popular Western confectionary is also a way to inject flavours to the mooncakes while not being entirely alien to customers' palates. At Café Mosaic at Carlton Hotel, cheesecakes are particularly popular.

Hence the team decided to introduce the popular cheesecake flavour, which would entice both mooncake and cheesecake lovers. This culminated into Mini Blueberry Cream Cheese Snowskin mooncake which Chef Jackie Li says encapsulate perfectly East and West together.

At Java+, located in Singapore Marriott, its bestselling Raspberry Earl Grey cake has given rise to A Royal Weekend (Earl Grey White Lotus Seed Paste with chocolate ganache and raspberry). The white lotus seed paste is perfumed with full-bodied Earl Grey and complemented with the tanginess of raspberries.

Mooncakes laced with alcohol are perennial favourites as well. These are often revisited as they've always proved popular with customers.

Mr Tay says that many people tend to gravitate towards desserts with a hint of alcohol in them.

He adds: "Flavours like whisky, rum and raisin, Irish coffee and our latest yuzu vodka also reflect the kind of ingredients that are favoured by locals."

At Fairmont Singapore's Szechuan Court, some of its bestsellers include Champagne Truffle and Chocolate Ganache, Baileys, and Rum and Raisin Chocolate Truffle.