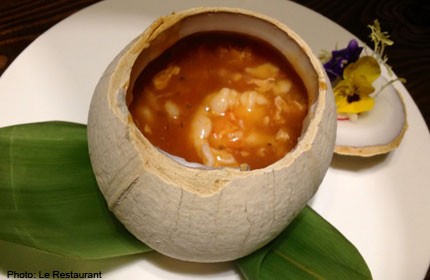 SINGAPORE - If nothing else, LE Restaurant sure knows how to make a first impression. Forget your conventional "hello, nice to meet you" - this is the equivalent of a stranger taking your hand, twirling you around a brightly lit stage, turning on a laser light show and leading a crew of black clad staff in synchronised world music grooving, all before saying "my name is . . ."

Over the top is perhaps an understatement at LE Restaurant - the Paradise Group's latest release that blends current trends such as tapas and cocktail bars into its core Chinese restaurant business. So you get this schmoozy bar area outfitted with a tapas bar serving Asian fusion bites, leading into a main dining hall dressed like a gold and black theatre where a giant, shimmering Buddha statue sits centrestage.

With the pulsating lounge music blasting at levels not very conducive to one's dimsum enjoyment, it feels as if you've wandered into someone's Buddha Bar fantasy amplified tenfold.

Even as it awkwardly fuses Chinese cuisine with its definition of fine dining elegance - food is served under those steel domes of yore that are rarely seen now except maybe on old TV shows and cruise ships - LE is actually a reliable Chinese restaurant at its core. What one can't understand is why it would dilute what it does best with lashings of jarring east-west confusion.

It will draw eyeballs for sure, and piqué the curiosity without doubt. But tantalise the tastebuds and keep people coming back for more, like cream of bak kut teh and baked cheese tofu? One isn't too sure.

On the plus side, you get very decent Cantonese-style cooking, such as juicy, bouncy siew mai ($7.80) and har kow ($7.80) topped with gold coloured sago and rice flour rolls ($8.80). There's at least one fusion creation of snails and cheese in puff pastry ($9) which isn't half bad, and would be better with a lighter and flakier crust.

The mini egg tarts, too, are reliably scrumptious. If the prices seem higher than the norm, they are, but a current 50 per cent off dimsum promotion brings the price down to more conventional levels.

Unusual for a Chinese restaurant - but perhaps in a nod to its international leanings, the staff is a veritable United Nations of servers, with nationalities as disparate as Indian, European and Korean. All are pleasant and eager to please if rather clueless about the food, and order-taking is inefficient but to be expected given the clear strain on resources in this opening period.

Several dishes we order are totally forgotten, while those that do come are not terribly memorable. As we see it, there is a reason why bak kut teh is served as a clear broth of pork bones with a light herbal fragrance and complementing pepperiness.

It's so you can tell how much pork was used in the soup, and you taste real soup, not this floury mixture that goes into this creamed version ($12) served with diced pork and carrots and a sliver of crispy Spanish ham on the side. The ham helps to mitigate the artificial-tasting broth and its bitter herbal edge, but not by much.

Faring slightly better is the lobster in a tomato soup served in young coconut ($26) which tastes a little like commercial tomato soup with beaten egg aspiring to be chilli crab gravy but stopping far short of Jumbo Seafood standards. One consolation - the fresh lobster meat in the soup.

There's also a tendency to equate fusion with cheese - so we unwittingly end up ordering bland tofu gratinated with cheese ($18), jumbo baked prawn layered with prawn paste and creamy cheese sauce, and the aforementioned escargot cheese puffs. We are relieved when a comforting brown and white rice fried with crabmeat and shredded conpoy ($24) helps to bring the meal back to earth. And if the angel hair pasta stir-fried with dried Japanese shrimp ($28) could be more al dente and less stodgy, we might like it more.

The concept of LE is not entirely new. Tung Lok beat them to the punch with its kaleidoscopic MAD restaurant which combines cocktail bar, Spanish and Chinese food, and bakery to boot. But it still remains that fusion Chinese remains a hard sell. Familiar Chinese may be reliable yet boring, but all things considered, which would you pick: creamy bak kut teh or the traditional version?