From engineer to muffin seller 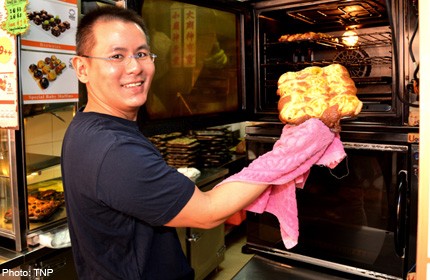 His father had left him a zi char stall.

But Mr Anton Tan, 42, transformed it into a muffin shop.

Says the former engineer, who used to earn about $3,000 a month: "My father made very good and popular zi char dishes.

"But it is hard to expand from a business perspective. I wanted to find a product that I could duplicate easily."

He tried numerous products, like Japanese pastries, sushi and dumplings.

Eventually, he decided on selling muffins.

"They are sweet, delicious and fragrant.

"They also let me exercise my creativity, since they can come in many different flavours."

Mr Tan has an engineering degree from the University of Manchester Institute of Science and Technology in the UK.

He was retrenched from his semi-conductor firm in 2004, after working there for five years.

At the time, his father owned a stall at Lorong 1, Toa Payoh. But the old man was dying from cancer and handed the stall over to his son.

Says the younger Mr Tan: "I initially thought of giving up the stall and returning to the 'stable' world of engineering. But my mother and I want to keep it alive, out of respect for my father.

"Even after I decided that selling zi char was not for me, my mother asked me to keep the shop's signboard.

"She has never asked me for anything before."

So that's what he did. In August 2005, the bachelor packed up the wok and focused on whipping up just muffins.

Like fortune cookies, some muffins also come with a fortune slip with either meaningful quotes, lucky numbers or a puzzle.

When he first started, he sold only about 10 muffins a day. Now he sells a few hundred.

He says: "Initially, business was so bad, I started to appreciate even what one dollar can buy me.

"My shop doesn't have a long history of making muffins, but I'm willing to work hard to please my customers."

What: Ugglimuffins.com
Where: Block 127, Lorong 1, Toa Payoh, #02-34, Singapore 310127
Hours: 10am to 2.30pm, closed on Mondays
How much: 90 cents for a baby muffin
Is it good? These muffins aren't pretty. They are scooped out from baking trays with a pair of tongs. But the taste is lovely. They are light and fluffy, and the crusts crumble just right.