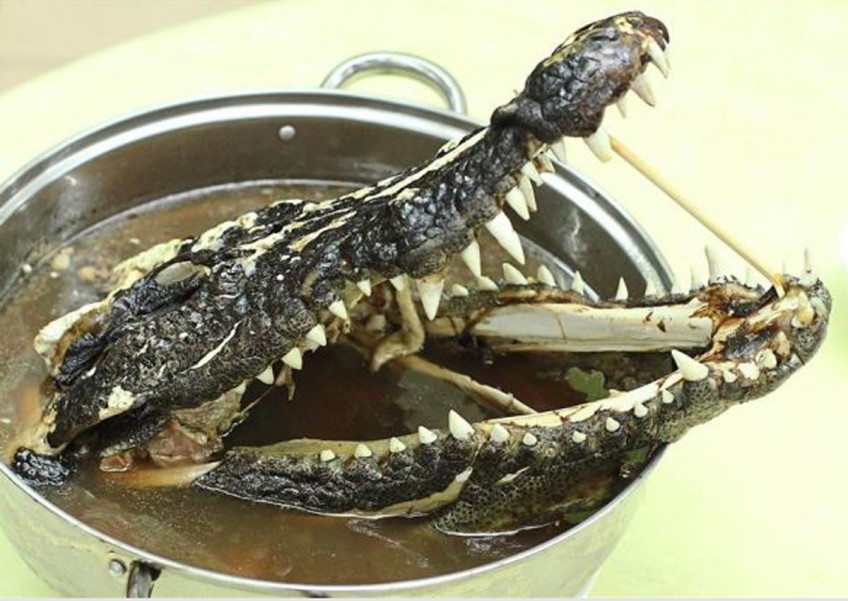 Inviting meal: Although the crocodile head may look frightening, it actually tastes delicious, with meat so tender, it literally falls off the ... er, skull.
The Star

Journalists Louisa Lim, Sharmila Nair and Abirami Durai tried them all in a bid to push their palates - and minds - to the limit.

She was surprised to find that there is a shop dedicated to the Taiwanese street snack in Kepong Baru, Kuala Lumpur.

For Sharmila, terror set in when she opened the box of live sago worms which a colleague's father had brought from Sarawak.

"I opened the lid and squealed so loudly that everyone around me rushed over to see if I was all right," she said.

Of the balut, the frightening Filipino ferti­lised duck egg, Abirami said: "It was warm and seemed to taste of internal organs."

The #Squealmeal challenge is eating food that you fear or is outside your comfort zone.

"Now I know that croc meat is actually very delicious and has gastronomic potential.

"But disgust with eating something fearsome, cannot be easily shaken off - even when the meat comes from a licensed farm which breeds crocodiles for leather.

"Having tried hornets and finding them good, I now see eating insects as being not that improbable an idea," Wong said.

She was referring to the United Nations' call in a 2013 report to eat protein-rich insects to boost nutrition. This "underutilised" food could help fight world hunger, the report said.

"As for sago worm, if you deep-fry and coat it with dark chocolate, I could be persuaded that the squishy, yellow cream is mango custard or creme brulee!" Wong added.

If you would like to take part in the challenge, send a video, no longer than one mi­­nute, showing you eating something you fear, or a photo and brief explanation.

Then post it on the Star2.com Facebook page, tag Star2.com and include the hash tags #Star2MonthyChallenge and #Squealmeal. The three best entries will each win a pair of passes to the Offaly Good Feast, a multi-course offal degustation dinner in early December, to be presented by Chef Jean Michel Fraisse of The French Culinary School in Asia.