Fancy a meal of insects, anybody? 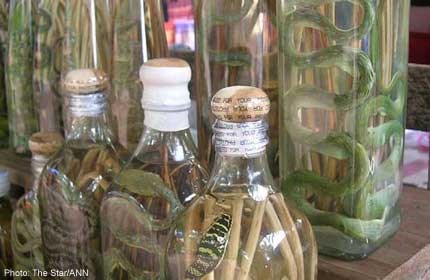 MALAYSIA - Crunchy bursts of nutty flavours filled with nutritious goodness - that's basically what you get from a meal of insects, or so they say.

While the United Nations Food and Agricultural Organisation (FAO) is making a clear call for the world to embrace these critters as part of their daily diet, the Malaysian menu is unlikely to see a bug infestation anytime soon.

The country's first female gold medallist in bodybuilding, Lilian Tan, 41, swears by a high-protein diet (which, incidentally, bugs are rich in) but will not be tucking into a bowl of worms in this lifetime.

"Gross! I've never eaten any sort of bug in my life - at least not that I'm aware of. I don't see myself incorporating bugs into my diet to meet my protein intake requirement," says Tan, who won Malaysia's first gold medal in the World Bodybuilding and Physique Federation (WBPF) Championships.

Sarawakian Brendan Lo Rick, 25, however, doesn't mind bugs in his food, having always wondered what they taste like.

The postgraduate student admits to having "a thing" for crispy and exotic food and has even "tasted" his pet goldfish.

"I've never tasted bugs before although I did catch an insect and ate it uncooked when I was three. So yeah, I wouldn't mind bugs in my food," he quips.

"Ants are tasteless probably because they're to small to have any taste.

"I once wanted to try the fried grasshoppers that were sold in some stalls in Thailand. They did look delicious but the legs were disgusting so I ended up not buying.

"There were bees and other types of weird insects too and I saw quite a number of people buying them," she shares.

Faith isn't looking forward to meals of insects as her mum's home-cooked food "is healthy, nice and tasty enough".

As her mum prepares a balanced diet, the 14-year-old says her family gets enough nutrition and protein even without bugs!

Lecturer Kamal Solhaimi Fadzil thinks Malaysians will only resort to eating insects if there's "no other choice".

"Contrary to popular belief, we don't just eat to survive. Eating is more than just about filling the tummy - we look at the aroma and aesthetics to add value to what we put into our mouths," he says.

"Even the poorest segments of society will attempt to make their dining experience enjoyable. Take stews, for example. Leftovers are thrown together with spices added to make the meal tasty."

Kamal Solhaimi, from Universiti Malaya's department of anthropology and sociology, has conducted research on indigenous peoples and their customs.

He says blaming the "yucky factor" alone for our reluctance to consume these energy-bursting critters is oversimplifying matters.

Because it is socially constructed, the "yucky factor" can be overcome if there's a need, he believes.

"What is horrid or tasty is a social construction. If we want to make insects part of our daily diet, we need to not only get over the idea of it being gross but the entire food industry, non-governmental organisations, private companies and government departments and agencies must be able to promote and produce insect grub that is palatable before the public can accept this new menu.

"So yes, adopting the FAO report is possible so long as eating insects is not contradictory to our cultural taboos and religious beliefs.

"People can always adapt to new cultures and the social construction of what's enjoyable is ever changing.

"That said, why would we want to eat insects in the first place?"

He recommends re-looking our existing diet and our purchasing habits for food sustainability.

Environmentally speaking, he thinks practical measures like eating more vegetables and supporting local farmers and small-scale poultry suppliers would do more towards saving the earth.

"The problem is not our food source but whether we are producing it sustainably. Let's look at that instead of including insects in our daily diet."

Asked about the impact of the FAO report, he says that at best, insects may become a slightly more popular delicacy for a very niche market here, but not mainstream food.

"A meat eater will never understand how a vegetarian can ever be full after a meal because to the former, the food consumed lacks substance - that's his construction of food.

"Similarly, the social construction of eating insects would probably be that it does not fill the stomach no matter how much you consume.

"It's true that in Sarawak, some indigenous tribes such as the Melanau eat sago worms but it is a delicacy to them, not a main source of food.

"Why would they need to rely on insects for nutrients when they are surrounded by fruit trees, edible flora and game?

"Now, only the elderly folk still consume sago worms," he says, adding that in the peninsula, the orang asli do not eat insects although some remote villagers in the northern farming settlements ate young grasshoppers back in the 1960s.

For example, 100g of crickets contain 121 calories, 50g fat, 5g carbohydrate and 12g protein, she states, adding that the critters are also rich in iron and other minerals.

She says that while insects are suggested as a source of food to combat hunger in impoverished countries where there is a high rate of malnutrition and scarcity of other conventional foods, the association does not suggest it for Malaysians.

"We are fortunate to have abundant food sources and need not resort to eating insects to obtain adequate nutrition," she says.

Having tasted deep-fried spiders and steamed snails in Cambodia, and the quintessential fried caterpillars, worms, crickets and bugs in Thailand, like most Malaysians, I can't see our nation embracing this new menu no matter how much sense it makes!