We walked into what seemed like a quiet, unassuming restaurant. The long and narrow passageway was lined with tatami rooms on either side, and they were full of guests. We were at Heikechaya in Shimonoseki, near Fukuoka in Japan.

The restaurant is known for serving the famous Japanese delicacy known as fugu, or blowfish/pufferfish. What is special about fugu is that it is poisonous. Its organs contain tetrodotoxin, a lethal poison that is said to be even more deadly than cyanide.

Was I nervous to try it?

Initially, yes. But, I was calmed by the knowledge that fugu is available in many supermarkets and wet markets in Japan today. It is also served in several restaurants here, and consumed by many people. In fact, our first encounter with fugu was at the Karato Market in Shimonoseki. Even though we didn't have time to try it at the market, this is where you could see fugu being prepared and displayed for sale.

Fugu must always be prepared by a skilled and licensed chef, so that was also reassuring.

We sat down in front of the dining table in the tatami room - half excited, half anxious. I admit that I'm not so adventurous when it comes to food - I don't usually eat anything that is still alive (or moving!) or uncooked. 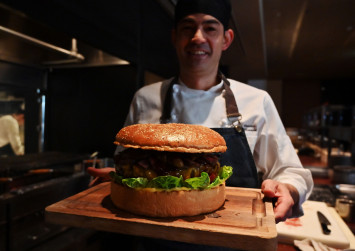 Our first course arrived. It was not fugu but a pretty tray of appetisers including preserved and fresh vegetables, as well as a kind of beancurd with some sauce. Then came the fugu sashimi. It was finely sliced and elaborately displayed like a round fan spread out on a plate with some other bits on top. I picked up a slice, squeezed a little lemon on it, dipped it in soy sauce, and ate it. The meat had a springy texture that's similiar to squid. It wasn't as bad as I thought. In fact, it was actually nice.

Eagerly, I looked forward to the next course which was deep fried fugu or fugu karaage. This was my favourite among the dishes served. It was lightly breaded and perfectly fried with light seasoning.

We were also served fugu salad with a tangy dressing, and fugu sukiyaki or hotpot, served in a claypot with mushrooms and vegetables. When the soup started to boil, we dished out the fugu. The meat was firm and tasted fresh, juicy and sweet.

Finally, the last fugu dish served was sushi. I was already full by this time but picked up the sushi and dipped it in the soya sauce and tried it. Light and springy, the sushi was delicious, and the perfect end to our fugu course meal.

Apart from the food, we were also given some hot sake with fugu fin to try. This was prepared and heated up in front of us. Yes, there was really a fugu fin in the sake but it did not taste weird. It actually paired well with the food.

I would probably try eating fugu again sometime in the future … but only in Japan.