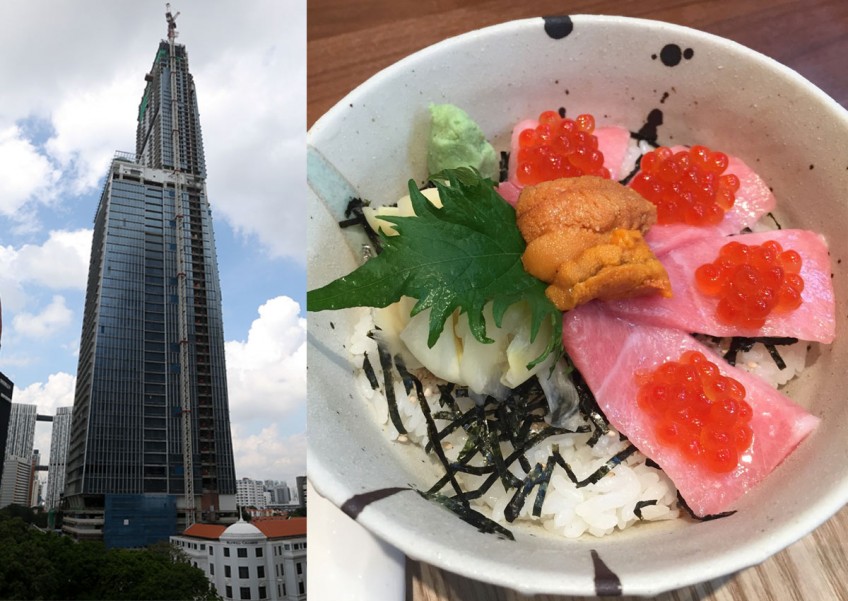 Japanese dining clusters have sprouted up across the country's shopping malls, and integrated complex Tanjong Pagar Centre located within the CBD is no exception.

Boasting first-in-Singapore restaurants such as the Japan Rail Cafe and Hattendo, there are gems to be found in all five establishments in the enclave. Ippudo ramen is set to be the sixth Japanese eatery there once it opens its doors within the year.

We suss out all five eateries in one sitting to bring you the highlights:

As its name suggests, maguro, or Japanese tuna, takes centrestage here. It is a more casual dining outfit compared to its upmarket sister restaurant, MaguroDonya Miuramisakikou at Suntec City.

You'd be wise to eschew Singaporean diners' favourite salmon sashimi for once and give the high-quality blue fin tuna flown in from Japan's Kanagawa Prefecture a try.

The best part? The donburi (rice bowls) are value for money and well worth the price.

But if we could only pick one favourite, the Toro Aburi Meshi donburi ($32.80) with a mix of chopped and flame-seared otoro (tuna belly) slices comes up tops for its melt in the mouth textures and addictive smokiness.

We also sampled the Honmaguro Akami (red meat) Sashimi ($24 for five slices), which is uncharacteristically creamy and one of the best quality we've tasted outside of Japan. It's a cut above the pedestrian conveyer belt sushi offerings many of us have (unfortunately) grown accustomed to.

By now, many of you may have tried the pillowy soft cream buns ($2.50 each) which drew long queues when it first opened.

But did you know that they serve a mean cuppa Joe too? The original blend roasted beans are flown in directly from a specialty coffee shop on Miyajima Island in Hiroshima prefecture. We recommend the full-bodied long black ($4) which is aromatic yet not overly-acidic, which pairs well with the dessert buns.

The buns are baked fresh on-site, though we believe head chef January Liang when she tells us that they taste the best 'when they're not so fresh' - the day after they've been piped, as it allows the cream to melt into the bun.

We are also told that the sweetness level of the five different-flavoured fillings have been turned down a notch to suit the local palate. But our favourites, which also happens to be their bestselling, are the custard and whipped cream flavours.

The bakery will be launching a new Sakura flavour by the middle of March, which will be available for a limited time only.

If you're dining in, we also recommend the beautifully-plated French Toast with Ice Cream ($9), where sugar is sprinkled over the bun before it is torched, producing a nice outer crust which contrasts well against the creamy filling - much like a doughy creme brûlee.

Order it while you still can as it's another seasonal item on the menu.

Seems like Singaporeans can't get enough of Tonkatsu, and the newest entrant to the cluster is here to feed the frenzy.

This is Imakatsu's second outlet in Singapore after its Star Vista restaurant, and the two are the establishment's only outposts outside of its Roppongi flagship and Ginza branch in Tokyo.

According to the Japanese head chef, the fresh pork and chicken arrive from suppliers chilled and not frozen, so that they can go through a lower-temperature frying method which yields more tender meat.

The Sasami Katsu Zen ($14.80) or chicken fillet katsu here is the one to beat and trumps the pork version, in my opinion.

It is surprisingly tender with a light, non-greasy batter, and is so good that we're willing to overlook the fact that one of the rolls was just slightly undercooked in the middle, just a tad.

Nowhere else outside of Japan can you find this unique tourism themed cafe, providing a one-stop experience to dine, shop for products and buy train tickets at the same time.

The chirashi don with salmon sashimi and Aomori scallops can be enjoyed two ways - eat it as you normally would and thereafter, add some broth (we recommend the flavourful original, made with chicken and pork stock) to your bowl to make it an ochazuke, or Japanese-style porridge.

The cafe's seasonal items and food products on sale changes every month according to the region - with Kyushu being its featured region for the month of March. Tokyo will be the cafe's focus in April.

This Japanese chain restaurant first established in Malaysia in 1996 has landed on our shores with its first outlet at Tanjong Pagar Centre.

The casual dining outfit will appeal to families or office-types looking for variety at wallet-friendly prices.