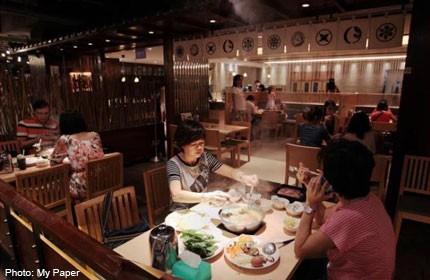 SINGAPORE - Several prominent malls around the island have revamped their food wings to satiate the ever-changing tastebuds of shoppers here.

One such mall is Causeway Point in Woodlands, which began revamps as early as July 2010.

A total of $72 million was spent on the mall-wide overhaul, which concluded in December last year.

Its new Asian Food Street now occupies the space that was previously a foodcourt and other stores.

There is a total of eight Asian restaurants, of which five are new tenants.

Mr Takahashi Naoki, managing director of Create Restaurants Asia, which owns Shabu Sai, said that the response "has been very good so far, especially during the weekends when we have about 20 to 30 people in queue".

The restaurant seats up to 120 people.

Similarly, Gurney Drive, a Singapore restaurant franchise that specialises in authentic Malaysian cuisine, has opened its sixth outlet at the Asian Food Street.

Mr Ricky Lim, executive director of Gurney Drive, said that business has been "pretty successful, with many new walk-in customers". He added that a lot of customers were regulars at the franchise's Ang Mo Kio outlet.

"(Causeway Point) is the biggest suburban mall in the north and our target audiences are families. This is our biggest outlet secured so far," said Mr Lim of the 2,750 sq feet restaurant that seats up to 180 people.

Ms Molly Lim, senior centre manager for Causeway Point, said that the management recognises the strong support for Asian food among Singaporeans, and thought it would be a good idea to cluster them together for the convenience of customers.

There is a total of 15 food and beverage (F&B) outlets in the wing, of which eight are new tenants.

Other malls are also freshening up their F&B line-ups.

313@Somerset's revamped food wing is scheduled for completion by the third quarter of this year, while Marina Square shopping mall last month launched The Dining Edition, an area which features restaurants such as Bangkok Jam and Beanstro.

Shaw Centre will introduce a basement food court that will link Shaw Centre and Shaw House in the first quarter of next year.