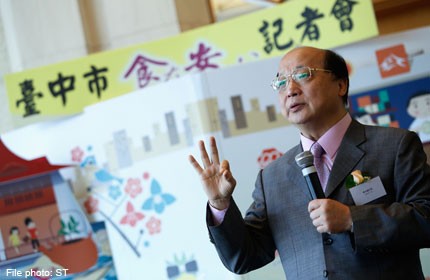 SINGAPORE - Taiwan food products are safe, assured a senior politician from the self-governing island on Monday during a visit to Singapore.

Three months after several of Taiwan's food products sparked health concerns here, Taichung mayor Jason Hu said checks have been stepped up. "The stricter the regulations the better. That means that our food is healthy."

The mayor was at the Grand Copthorne Waterfront Hotel on Monday for a press conference to promote Taichung's food industry.

Taichung, the island's third biggest city by population after Taipei and Kaohsiung, is famous for its sun cakes. Bubble tea is also reputed to have originated there.

While acknowledging the recent food contamination scare, mayor Hu noted that snacks and beverages imported from Taichung have been approved by both the Taiwan Peace Diet HACCP and the Agri-Food & Veterinary Authority of Singapore (AVA).

In May, traces of maleic acid were found in starch-based products from Taiwan, prompting AVA to recall 11 of them from shop shelves here.

Long-term consumption of the unapproved food additive can lead to kidney damage.

While admitting that there has been a loss in confidence in Taiwan's food safety, mayor Hu added that this is a global issue that every country has to address.

Referring to the recent Dumex milk powder scandal which hit New Zealand, he said: "I feel that the whole world has now been awakened. No one wants to eat food that is harmful."

Other guests included representatives from travel agencies and food companies from Taiwan and Singapore.