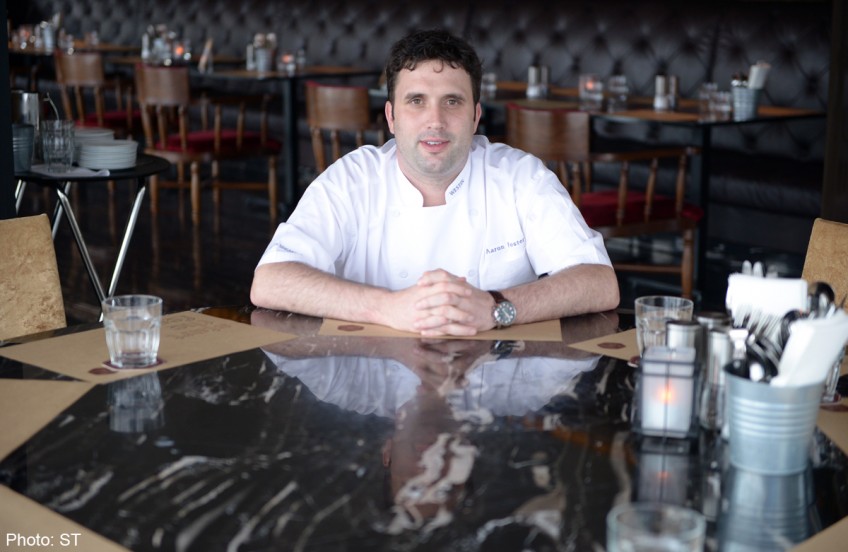 When he was 14 years old, Aaron Foster's hopes of becoming a chef were dashed. On the pretext of having learnt to cook eggs in home economics class, he offered to make omelettes at his mother's now- defunct Victorian-style tearoom, The Mercantile Cafe in Ontario, Canada.

He says: "I didn't even know how to crack an egg, but I love the pressure, heat and adrenaline rush of working in a kitchen, and got hooked instantly."

His mother, now 65, realised that the eggs were not done well, and he "went from being an egg cook to a dishwasher very quickly".

He laughs: "She fired me a lot and hired me back, as she was tired of giving me pocket money without working for it."

However, he persevered and continued to take up cooking stints in bars and restaurants throughout his school years. Despite having an engineering degree from Mohawk University in Ontario, he returned to his first love - cooking and enrolled in the Canadian Food and Wine Institute in Niagara College, also in Ontario.

Now 34, he is the executive chef of The Westin Singapore in Marina View and oversees the hotel's four restaurants, which include gastrobar Cook & Brew and buffet restaurant Seasonal Tastes.

He is married to a 32-year-old Thai, who was a former chef. They met in Toronto. Inspired by the vibrant culture of Thailand he experienced during his honeymoon in 2008, he decided to move there.

In Bangkok, he opened acclaimed restaurants such as rooftop bistro Red Sky and steakhouse Fifty Five.

Foster, who has a four-year-old daughter, considers his Thailand stint to be the most exciting in his career.

He says: "At 27 and without knowing how to speak Thai, I started Red Sky, which became one of the best restaurants in Bangkok then. It was no-holds-barred cooking. I could stuff lobster and foie gras into pork and see how it went."

What is your favourite meat?

I love pork and eat it head-to-tail, including sweetbreads, brains, eyeballs and ears. I prefer pork to beef as my mother overcooked the roast beef every week for Sunday Roast and that threw me off, but her roast pork with apple sauce was the best.

What do you remember most from culinary school?

I grew up in a small town, where food was simple. It opened my eyes to understand that food does not come from a bottle or can. I realised that a vinaigrette does not come from a plastic bottle, and that there is a ratio of vinegar to oil in it, and saw how mayonnaise was made from the emulsification of egg yolks and oil.

What was one thing that you remember when you first started out?

I thought that cooking in the kitchen was rock 'n' roll and living on the edge, but it was chef Chris Zielinski of YYZ Restaurant in Toronto who taught me to understand food and appreciate the farming process behind the ingredients and respect the kitchen.

What are must-haves in your kitchen?

Great mustards, such as Dijon and Kozliks Canadian Triple Crunch mustard, as they are versatile; good red and white wines; bourbon, as it adds a sweet-savoury flavour to food; slabs of smoked cured bacon; and soy sauces and fish sauce.

What do you think is the most difficult dish to cook?

Pad Thai sauce. I spent many hours sweating it out with my wife's aunt in her village near Hua Hin to figure out how to make this sauce. It contains tamarind and lemongrass, and it can get quite technical to achieve the right flavour, colour and consistency.

What is your worst kitchen disaster?

A fellow chef forgot to put on the brakes of a food trolley, which contained four whole pigs that had been roasted for 12 hours for an event by the beach. They slid into the sand and looked like they were sun-bathing. My body went numb. Thankfully, I knew chefs from other restaurants, which helped to provide roast pork.

What are your favourite local foods?

I love chicken rice and popiah from Kovan Hougang Food Centre. Especially popiah, which I can eat five times a week, as I love the freshness of the ingredients. I also like laksa at Lau Pa Sat. I always make sure that I visit the stall with the longest queue.

What are your must-haves when you return to Canada?

Buffalo chicken wings from Anchor Bar, a beer brisket sandwich from a southern barbecue restaurant called Lou Dawgs, where the fillings are cooked for 24 hours and are to die for.

What are your guilty pleasures?

Do you cook outside of work?

I like cooking braised beef and pork dishes and make a beautiful ribeye steak with mustard. When I cook with my wife, who was a chef, we cook East-meets-West meals, such as grilled pork neck, and green mango salad with smoked cheddar cheese and apples.

I am part of an ice hockey team called Manimals. We play at the ice-skating rink in JCube Mall in Jurong East every Sunday. It is a bar league and we go for drinks after these sessions.

If you could pick anyone to have a meal with, who would you pick?

I will cook for my late maternal grandparents. I want them to see what I have accomplished.

I looked after my grandmother when she was dying from cancer. Three weeks before she died, she advised me to do what makes me happy and gave me the last push to go to culinary school.

This article was first published on Mar 22, 2015.
Get a copy of The Straits Times or go to straitstimes.com for more stories.