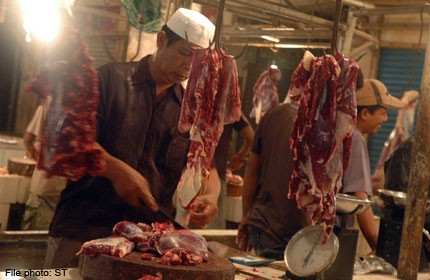 JAKARTA - The government's effort to lower beef prices during Idul Fitri is falling flat as the price has kept hitting a record high throughout the festive period, with Agriculture Minister Suswono attributing the hike to alleged price-fixing by individuals in the supply chain.

The government had pledged to deflate the price of beef at Rp 76,000 (S$9.12) per kilogram during the holiday from Rp 90,000 by adding more beef outside this year's annual quota.

Suswono said on Monday that the government had taken the necessary measures to maintain the price and ensure that the supply was adequate, and said the ministry suspected foul play was behind the wild price hike.

"We have gone all out in our attempts to drag down the price of beef. Stocks of beef are more than enough to meet needs during Idul Fitri," Suswono said.

"If the price remains high, its possible some people are trying to benefit from surging demand by hoarding the beef and fixing the price."

To curb the price from wildly increasing during the Ramadhan fasting month and Idul Fitri, the government had appointed the State Logistics Agency (Bulog) to bring in 3,000 tons of frozen beef outside this year's annual quota of 80,000 tons, which consisted of 267,000 head of live cattle and 32,000 tons of frozen meat.

The government has also imported an additional 8,990 head of live cattle, part of a total of 24,750 head of extra live cattle to be imported this year, to maintain the price during the Islamic festivities.

Suswono said the government, through the Trade Ministry, would evaluate who should be held responsible for hiking the price, adding that any importers or feedlotters that were proven of being anti-competitive would face heavy penalties.

Muhammad Syarkawi Rauf, a commissioner at the Indonesian Business Competition Supervisory Commission (KPPU), said the agency was already in the final stages of its investigation into the alleged cartel practice by a number of meat importers. It aimed to soon step up the probe by beginning its first evidence hearing.

"The strongest indication of an alleged cartel is persistent meat price rises in the past few months, despite massive imports permitted by the government," he told The Jakarta Post.