A fried banana stall that is just 'out of this world' 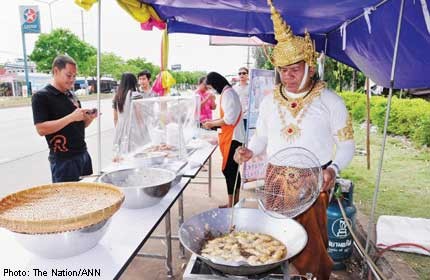 When 59-year-old Somsak Dongkrathok started selling fried bananas at a market in Tambon Hua Thalae in Nakhon Ratchasima's Muang district, he thought that adding "a divine touch" would make him more successful.

So, he decided to dress up as an angel and name his stall "Thevada Kluay Tod" or "Angel's Fried Banana", with the message "most delicious in all three worlds (heaven, earth and the underworld)". Ironically, his stall is located right in front of a Chinese cemetery.

By spending just Bt1,700 (S$69.30) on the costume, Somsak has become a bit of a local celebrity with people stopping by to take pictures with him. His stall, where the fried bananas go for Bt20 per pack, operates from 9am to 4pm.

Customer Thaweepol Kulwattanawimol said Somsak's idea to dress up as an angel was strange, creative and fun - while the snack tasted very good as well.

Prajak Leuchaisa said the image of an "angel" standing by the street frying bananas was so funny that he had to pull over to buy the snack and take photos with him.