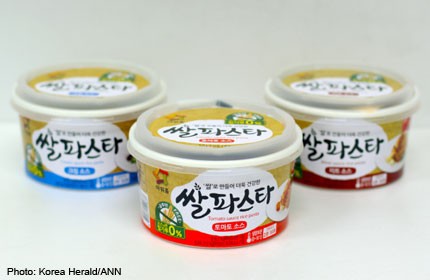 SOUTH KOREA - While the term "gluten-free" is still relatively new to the Korean food industry, this year might witness the gluten-free movement as well as the related wheat-free trend take hold here.

According to the Mayo Clinic's website, a gluten-free diet omits all food containing gluten, a natural protein that can be found in wheat, barley, rye and triticale.

While a gluten-free diet originated primarily as a course of treatment for people diagnosed with celiac disease, it appears more people are cutting gluten or wheat from their diets because of theories that it is good for one's health to eat less wheat or gluten.

Those theories seem to be influencing Korean consumers as well, signaling the spread of gluten-free and wheat-free trends to the Korean market.

This May, the Korean Society for Food Engineering organised a gluten-free product symposium and, two months before the symposium was held, major food service company OURHOME launched three varieties of gluten-free pasta.

"We plan to continue to add to our range of imported products if we find the right match for Korean consumers," an ORGA PR representative said.

Gluten-free products can also be found in department stores, and Shinsegae Department Store's bakery might be jumping into the gluten-free baked goods market in the near future.

Though the bakery does not produce or carry gluten-free goods at the moment, Shinsegae Department Store bakery buyer Cho Chang-hee said, "With increasingly info-savvy, health- and diet-conscious consumers giving gradual rise to the need for gluten-free products we have future plans to develop such goods."

All of this signals the potential for the growth of the market for gluten-free and wheat-free, food.

"Until recently, interest in gluten-free products here was practically zero when compared to overseas markets," said OURHOME product manager Jung Soon-ah. "To get gluten-free goods, consumers had to purchase them from overseas sites and the like."

That has changed somewhat, but why?

In Jung's opinion, the introduction of Western eating patterns has led to increased wheat consumption, giving rise to illnesses that may be wheat-related.

"This in turn is peaking interest in gluten-free food," said Jung.

Jung went on to predict that current "well-being" and "healing" trends will further spur the growth of Korea's gluten-free market.

The Korean Society of Natural Medicine president Seo Jae-gul also pinpoints a Western diet as one of the reasons behind the gluten-free diet.

Seo, who is chief doctor at Pomona Clinic, states that consumption of processed food, Western eating patterns, environmental pollution and, in his opinion, the consumption of gluten, in particular, act as contributing factors to the increase in autoimmune diseases like type 1 diabetes and lupus. He recommends a gluten-free diet to patients he treats that are diagnosed with such illnesses.

Instead of wheat, Seo advocates the consumption of rice, especially brown rice, which he says is good for one's intestines, under his medical belief that consumption of wheat flour-based food, which has gluten, may contribute to immune system-related problems.

Both Jung's and Seo's statements appear to bear many similarities to the very reasoning that seems to have exploded a once non-existent niche market into a booming business abroad.

According to consumer market research publisher, Packaged Facts, the US gluten-free market totaled a whopping $4.2 billion (S$5.3 billion) last year and gluten-free product sales are predicted to reach over $6.6 billion by 2017.

A quadrupled incidence of celiac disease in comparison to its incidence 60 years ago, as published in Mayo Clinic's online research magazine in 2010, may have played a role in increasing demand for gluten-free food.

However, according to the same article, only around 1 per cent of the US population suffers from celiac disease, which is a chronic condition where consumption of gluten triggers the body's immune system to attack the small intestine.

Therefore, it seems that the popularity of books like "Wheat Belly," which promotes a wheat-free diet, and the adoption of gluten-free and wheat-free diets by high profile celebrities may have also played a key role in spreading the trend.

When "Wheat Belly," written by cardiologist William Davis, hit shelves in 2011, it was an instant hit, topping the New York Times bestseller list.

The basic argument behind "Wheat Belly" is that today's methods of wheat production are causing various illnesses and conditions, including obesity and rashes.

While there has been controversy over his ideas, this does not seem to have affected the popularity of the book. Within a year after "Wheat Belly" was published, a companion cookbook was released.

"Wheat Belly" was translated for the Korean market as well and interestingly enough both OURHOME's Jung and Pomona Clinic's Seo also pointed to wheat as a potential culprit behind certain ailments.

While some might raise their eyebrows at the idea of giving up wheat, others like Grammo Kitchen chef and co-owner Choi Byeong-gu have begun to try wheat alternatives for health reasons.

Nearly a year and a half ago Choi started to develop a wheat-free bread crafted from rye.

"I wanted to eat bread," said Choi, who revealed he found it harder to digest regular bread. "I also had a lot of peers and friends who had similar issues and dealt with conditions like atopic dermatitis, so I made it for us to eat together."

What surprised Choi was that he was not alone. When he started selling his bread at a monthly food-and-farmer's market, the response was so good that people were coming from as far as Busan for his bread.

According to OURHOME's Jung, response for the brand's gluten-free products has been positive as well.

"After our products were launched in March, sales have gone up by 100 to 200 per cent every month, putting it amongst OURHOME's top-selling products within four months," Jung said.

Jung foresees the spread of the gluten-free trend.

"It is a given that the number of restaurants serving gluten-free dishes and gluten-free products will increase," said Jung.

For now, gluten-free dishes at restaurants and products on the market are still far and few between, posing a challenge to those who want to stick to a gluten-free or wheat-free diet when dining out.