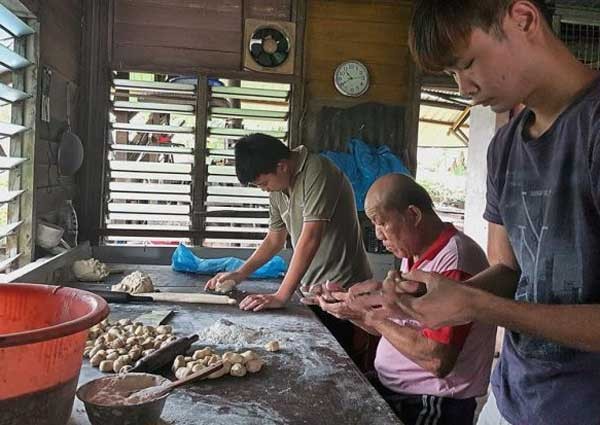 They appear deep in thought and their movements are precise, if not robotic, in the kitchen of an old wooden house.

Oblivious to the heat and humidity on a late Sunday morning, the four workers go about doing their work diligently.

They are the ones churning out the more-than-three-decades famous biscuits from Kampung Baru Ayer Hitam in Johor.

The sifu is 68-year-old Lam Chew Sor and the rest are Eng Cheng Lee, 30, who is the son of the factory owner, and workers - 20-something Tan Chee Seng and Tang Yong Jun, 15.

Operating from the Engs' house in the village, the entire production line in Chin Ping Chin Confectionery is the same like before, except that the traditional oven using firewood and coal has been replaced with an electric oven.

Cheng Lee said he has been helping his father Eng Ang Huat and mother Chew Siew Hua to make the biscuits since he was a child.

He said he only had a short working stint in Johor Baru before returning to his village to continue in his family business.

He has two younger sisters, one in the hair and beauty line and the other is an air stewardess.

As the only son, Cheng Lee looks set to continue the family business.

Kampung Baru Ayer Hitam chief Lim Tong Hai said the biscuits were among six types of delicacies from the village, which planned to promote to visitors and tourists.

Those that made his list are curry noodles and coffee, pau, curry laksa, yong tau foo and Teochew porridge.

"These dishes have always received endorsement from the locals. There are also repeat customers from everywhere, including Singapore," he said, adding the tourists were mostly travelling on their own, making stopovers for meals and also those on a food trail.

"In other words, they discovered the good food," Lim said.

While Ayer Hitam may not have huge number of tourist arrivals, Lim believes that the place has tourism potential that can be developed, including business and job opportunities for the locals, especially youths in the village.

With that, he hopes more youngsters will stay on or even return to the village.

Like many new villages in the country, Kampung Baru Ayer Hitam's population is fast greying because many young people leave to work and settle down elsewhere, including Singapore.

Tai Siew Hua, a retired headmistress, also hopes for more business opportunities in or near the village to rejuvenate the place.

"Ayer Hitam is very nice but there are not enough of jobs to cater to the younger generation," she said.

Tai is confident that tourism can give a new lease of life to the village when the industry is given the right push.

Many young people are creative, enterprising and IT-savvy these days, and they can package these assets to go into tourism.

Cheng Lee is a good example.

He may be confined to his village, churning out biscuits daily from 7am to 2pm, but his world is certainly beyond that.

He told StarMetro that his dream is to open a cafe one day.

"I like to experiment with coffee and exchange notes with Facebook friends from Taiwan who share a similar passion," he said when asked about his ambition and what he does as a hobby.

With cultural tourism increasingly popular, it looks like Cheng Lee is sitting on a very valuable asset - his parents' old biscuit factory.

To many tourists, holiday and tours are also about taking a closer look at the way of life of people and how the community has evolved over time.