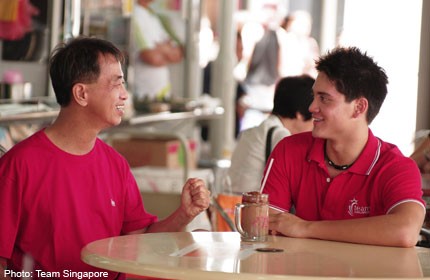 SINGAPORE - For someone who has competed in the world's largest sporting event and swum alongside the sport's biggest stars, Joseph Schooling's idea of happiness is surprisingly simple.

Just present him with a plate of fried carrot cake.

"Chai tao kway," as the 18-year-old would say himself. "The black kind. More black sauce - the sweeter, the better."

The Olympic swimmer has been based in the United States for the past few years, but Singapore remains his "comfort zone".

So it was apt that the former Anglo-Chinese School (Independent) student chose to feature something very Singaporean at a Team Singapore video shoot yesterday - his favourite hawkers and restaurateurs.

The five-part shoot, which will also feature athletes from disability sports, table tennis, football and athletics, is part of a well-wishing campaign for this year's SEA Games, focusing on how everyday Singaporeans are pillars of support for athletes.

Said Joseph, a Year 12 student at the Bolles School in Florida: "The life in America and back here is very different. In America, I have to be on the ball more, racing and training hard non-stop for the whole year.

"When I come back here, I look forward to relaxing and spending time with family and friends. It's like my escape.

"I'm definitely more comfortable here because this is home."

Many of those featured in the shoot, which took place at the Marine Terrace Hawker Centre yesterday, have watched Joseph grow up.

He recalled how, as a young boy, he would be given money from the market's fruit stall holder for kiddy rides, or how another stall owner would offer him fresh vegetables to eat on the spot.

"These are not just normal hawkers - they are more like family," said Joseph. "They contributed to my childhood and I have very fond memories of all of these guys."

Naturally, the hawkers and restaurateurs were more than willing to lend their support to yesterday's event - even if it lasted more than four hours.

Drinks stall owner Tan Toh Huat, for one thing, whipped up more than 20 glasses of Joseph's favourite "Iced Milo Dinosaur" for the shoot.

Said the 62-year-old: "Even though Joseph has become famous now, he is not proud and has no airs about him.

"It's not easy for him to train and study in the US. As a Singaporean, if we are able to produce a talent like him, we should support him however we can."

Roland Lim, managing director of Roland Restaurant, added: "I watched him grow up and am very proud to see him doing so well as a swimmer.

"It's a joy to be able to offer him some encouragement."

Joseph is scheduled to compete in seven events at the December SEA Games in Myanmar.

Should he better his haul of two golds, one silver and one bronze from the 2011 edition, a special treat awaits him.

Said V. Maheyndran, managing director of Samy's Curry: "I told Joseph that if he can come back from this year's SEA Games with five or six golds, I'll name a dish after him.

"I don't know what it is yet, but it will be something that swims."