LiHO promises to return cheese to its teas after June 25

Sorry, LiHO fans - the tea chain has run out of the much-talked about yummy topping for its cheese tea.

You've got to wait for new supplies to arrive after Sunday (June 25).

That's the notice put up at its outlets after it started running out of the cheese topping last week, barely two weeks after its launch.

"We're sorry we have run (sic) out of cheese. We promise to bring it back after 25th June," says the notice.

Wow, that's something we didn't expect.

Don't get us wrong - many of us love cheese. But we had thought it's gross to slip cheese into tea and that the general public would be repulsed by such a weird concoction.

We also thought the former operator of Gong Cha tea chain had gone cuckoo with his fusion ideas in his seemingly brash attempt to create a homegrown brand.

But within a few weeks, he has proven he's right. The recipe is quite something else but it has obviously gone down swimmingly with milk tea lovers thirsting for the next big flavour.

Recalling our initial apprehension, we had joined the queue to find out what the fuss was all about.

We approached the new brew with its strange, foamy topping like an unsure novice trying fusion cuisine for the first time. And we loved it! We got hooked on the creamy, salty taste of the cheese foam adding a startling new dimension to sweet milk tea.

So you can imagine our disappointment when we found out its popularity has outstripped supply.

But we shall wait for its return.

Will it be back on June 27 or 28? The LiHO notice says updates would be posted on Facebook.

Meanwhile, you can settle for its royal milk guan yin tea with the milk foam on top of the aromatic Chinese tea. No cheesy titilation, but it's still worth a slurp. 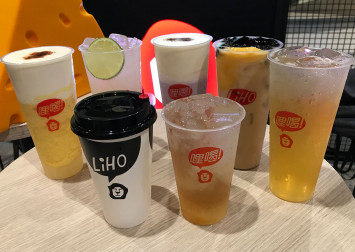