Lobster on a roll 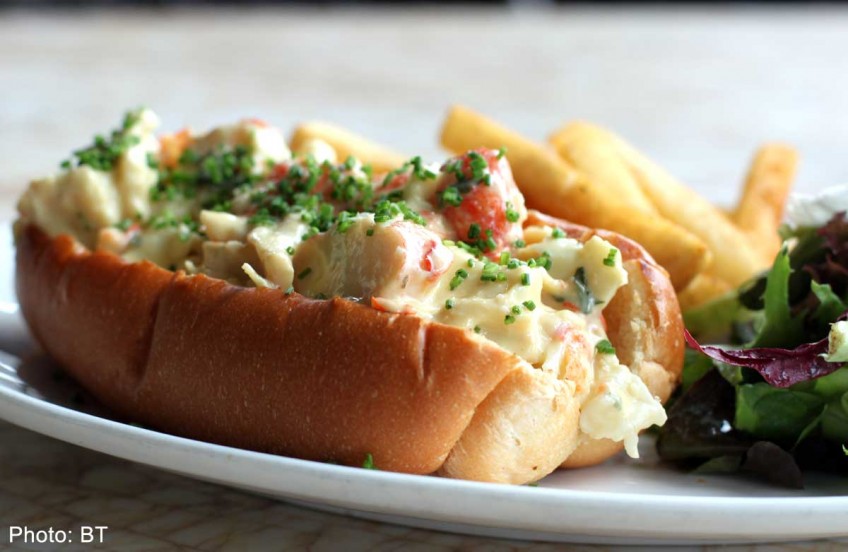 But they weren't always so popular, recalls Nicholas Lin of seven-month-old Platypus Lobster Shack. When he first debuted his lobster rolls as a supplementary dinner-only option at his box-lunch outlet, Platypus Gourmet2Go, it was not particularly popular. "Only a handful of our customers actually knew what a lobster roll was," says Mr Lin, who now sells up to 400 lobster rolls weekly.

But why is the American seafood shack favourite - said to be born of 19th-century New England hostesses who thought the consumption of an entire lobster too messy for their elegant dinner parties - suddenly catching on here?

The perception of lobster as a premium product typically served at high-end Chinese restaurants, coupled with the convenience of having them already shelled in a roll format is a winning catalyst, say most chefs and seafood restaurant operators. "As it is with trends in Singapore, when there are eateries that specialise in just one thing, people will start to wonder and shift their attention towards it," observes Denise Tan, marketing communications manager of year-old The Market Grill.

"Perhaps it is a sign of how affluent we have become as a country that something as decadent as lobsters has become trendy," adds Melvin Chen of The Cajun Kings.

More demand driving more seafood suppliers into the game has helped to bring lobster prices down so they can be made accessible to the masses, too. A lobster roll at shopping mall eatery Boston Seafood Shack, costs S$14, for instance, a third of what it would cost at upmarket outfits such as Boston-born Travis Maseiro's Luke's Oyster Bar and Chop House.

But why the vast price disparity? The origin of the lobsters used, the amount of lobster meat portioned in a single roll, and whether the lobsters arrive at a restaurant live, frozen or pasteurised determine the ultimate cost of a lobster dish, says Pince and Pints' Frederick Yap, who also set up a business to import his lobsters live from the US and Canada.

Indeed, online seafood retailers sell frozen whole Boston lobsters for as little as S$12 for a 500g whole lobster, frozen Maine lobsters for S$20 each, but live Maine lobsters can go up to S$38 a piece. American lobsters are typically favoured for their bright red colour, firm texture, meat yield per lobster, and year-round availability compared to European varieties. But due to the sheer abundance of lobsters off the Atlantic coast of the United States, lobsters are often not as expensive as they are perceived to be, reveals Mr Lin. He also keeps his prices down by working on more efficient ways to use all parts of the lobster, including its head and legs. Other restaurants mix their lobster stuffing with more affordable local crustacean meat.

As the preparation of a lobster roll requires more time, effort and extra ingredients than grilling whole lobsters, restaurants that have varying preparations of lobsters may have higher overheads due to multiple processes in the kitchen, say restaurant owners. A bulk of the cost stems from maintaining and storing the lobsters live in a restaurant, "but it's worth the cost and effort when you taste the final product", says The Market Grill's head chef Colin West.

Only the head chef and second-in-command cook were permitted to prepare lobster rolls "because if you mess it up, the costs are high", adds executive chef Andrew Walsh, who used to serve lobster rolls at gourmet diner Keong Saik Snacks, now rebranded as The Study. "Few people cook lobster at home as you need to know the methods and timing perfectly," he adds, which makes it "the ultimate snack to treat yourself to".

And when all has been said and done, that's what it should be - a snack, says Mr Lin. "Above all, a roll should be casual and not taken too seriously. It should be a beautiful mess at times and not always too prim and proper."

This article was first published on July 19, 2014.
Get The Business Times for more stories.