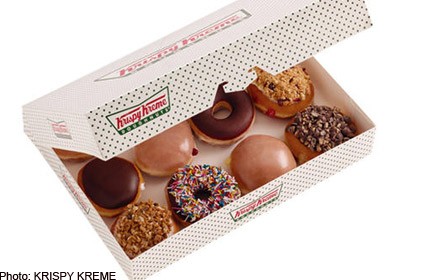 The moment staff in an Orchard Road hotel found out that Mr Jeffrey Welch was the president of Krispy Kreme International when he checked in, they asked him: What took the American doughnut chain so long to get here?

Indeed, these sentiments have been echoed by others, going by the buzz and excitement ahead of the opening this morning of Singapore's first Krispy Kreme outlet, at the basement of Tangs Orchard. The 1,200 sq ft store opens at 9am and the first three people in line will be entitled to free doughnuts every week, for up to a year.

On why the popular chain, which has offshoots worldwide and in Asian countries such as Japan, Thailand and Indonesia, is opening here only now, Mr Welch, 59, says: "We had a lot on our plate. We have grown from zero to 550 stores in 24 countries in about seven years. So we were pretty busy.

"We had looked at other opportunities to come to Singapore but it was important that we came in with the right franchisee. For us, it is better to be right than fast." Mr Welch, who is responsible for the chain's overseas markets, adds that Singapore, being a "cosmopolitan" country where "people are well- travelled, conscious and brand oriented", has been a market that the company had been eyeing since it opened in Indonesia in 2006.

The chain is famed for its fluffy doughnuts coated in a signature sugar glaze.

There are about 550 outlets outside of the United States in countries that span Britain to India. Its first outlet in Asia opened in South Korea in 2004. Prices here start at $2.60 for an Original Glazed doughnut, and from $23.40 for a dozen of them.

The same doughnut is priced at US$0.99 (S$1.24) each in the US and from about A$2.50 (S$2.96) in Australia, where the price varies depending on the outlet. In Singapore, prices of doughnuts at other popular chains here such as J.Co and Dunkin' Donuts start at $1.70 each.

The company inked the deal to be the franchisor last October and is committed to opening 15 outlets here in the next five years.

On why Mr Welch thinks the brand will fare well here despite competition from other established doughnut chains that have been in the market for longer, he says: "Our doughnuts are special. We've been in business for 76 years and we have a proprietary recipe. But we are as much about the experience as we are about the doughnuts.

"We try to bring an overall experience of sharing magic moments in the store and creating an atmosphere where people like to hang out and congregate with their friends and family." Founded in 1937, Krispy Kreme's doughnut empire includes more than 700 offshoots in 24 countries.

For now, the mix for the doughnuts here is shipped directly from the US, even though there are closer mix plants in countries such as Australia and South Korea. Mr Welch says: "Singapore is a fairly open market place, so it made sense for us to ship it from the US."

The parent company usually works with franchisees to ensure that they purchase materials from the lowest cost source. Overseas mix plants have been established as a function of import duties and restrictions, Mr Welch says.

For example, in Australia, the plant receives a proprietary mix and then blends it with Australian flour which has been approved by Krispy Kreme. Asked if the mix or recipe here has been tweaked or adjusted for Singapore's humidity, Mr Welch says: "It's the exact same stuff all around the world. If you take the doughnuts and leave them out in the heat and humidity, the glaze will melt, but we don't change it to suit the climate."

Other new markets on the cards include Taiwan, where it will be opening its first store in December, and South America - the chain recently signed a deal to open in Colombia. Mr Welch says: "It's taken a while to get to Singapore, but we're excited to be here. We're excited that everybody's been looking forward to it, and excited about having a great relationship with Singapore customers. We're here to stay."