Miami restaurant, survivor of desegregation and riots, to close 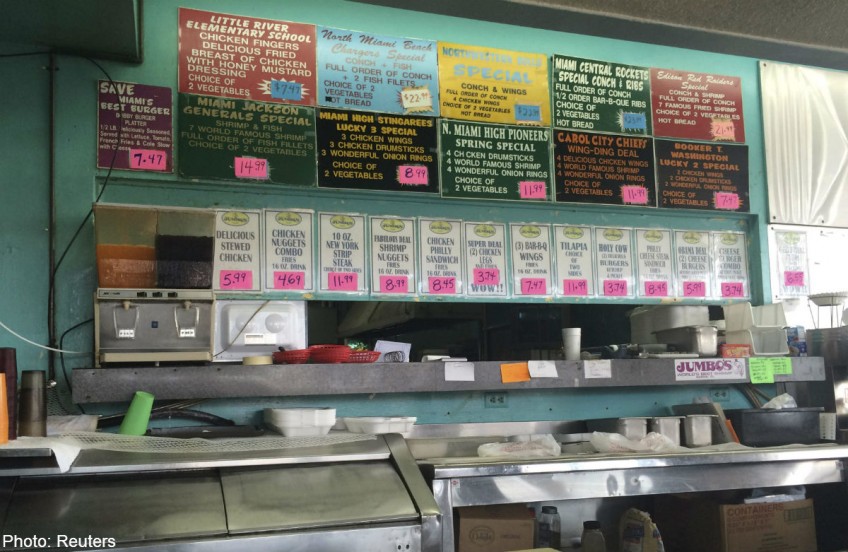 The menu featuring specials and standard dishes is seen in Jumbo's Restaurant located in Miami's Liberty City area, in this picture taken July 22, 2014.

After more than half a century, Jumbo's, famous for its fried shrimp and conch, and one of the first Miami restaurants to desegregate in the late 1960s, is closing this week as the site is sold to a developer of affordable housing.

The sea foam-green eatery thrived during the decades when the surrounding area, now called Liberty City, transformed from a middle-class white community to a predominantly African-American one. It emerged from 1980's race riots unscathed, without even a broken window, as neighbouring businesses burned.

"It's one of the vanishing remnants of the Miami of yester-year," said Paul George, a historian and professor at Miami Dade College. "The menu is reflective of the (city's) southern, farming roots."

Jumbo's desegregated in 1968 after owner Bobby Flam, whose first job was answering phones after his parents bought it in 1955, hired three black workers. In the weeks that followed more than 30 white workers walked off the job.

Flam had bought the restaurant in 1966 and is still seen as a father figure in the community, eager to give a job or meal to someone in need.

"I made the African-American customer feel very comfortable here and my overnight business grew," Flam said, even as "my lunch and dinner business was shrinking."

Jumbo's has long been a popular late-night stop for revelers emerging from Liberty City's surrounding nightclubs.

"If you knew you didn't have money for a meal he wouldn't say anything about it," said 77-year-old Lawrence Drayton, a Jumbo's regular since 1955, when segregation forced blacks to use a rear entrance and a separate dining room.

The riots of 1980, which broke out after the acquittal of four police officers charged with murdering 33-year-old Arthur McDuffie, marked the beginning of the end of Jumbo's, Flam said. It also cast a dark shadow over the area, accentuating its notoriety as a crime-ridden neighborhood.

"The conventional wisdom 34 years later is it's way too dangerous up there," George said.

Flam, however, was only able to wrest himself away from the place where he made his living and a bit of history following a 2005 hurricane that badly damaged it.

"There were plenty of times I said I wasn't going to hang on," Flam said, "but I never wanted to say I want to give up."