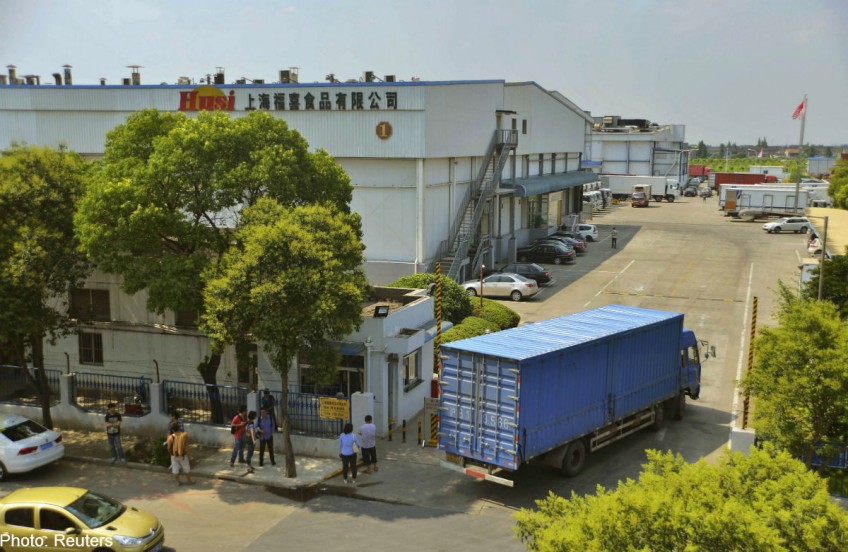 A truck drives past a building of the seized Shanghai Husi Food Co Ltd factory July 21, 2014.

The US coffee chain yesterday acknowledged that some of its stores previously sold products containing chicken from Shanghai Husi Food, which was shut down by local regulators on Sunday following allegations that it sold expired chicken and beef.

Burger King, in a statement posted on its Twitter-like Sina Weibo account late on Monday, said it had removed all meat products supplied by Shanghai Husi - a unit of US-based OSI Group - from its shelves. It added that it was investigating the matter.

Both companies join a growing list of restaurants, including McDonald's and KFC's parent Yum Brands, that have been implicated in the food scare. A television report on Sunday showed Shanghai Husi workers repackaging chicken and beef that had passed their sell-by dates.

The scandal has also spread offshore with McDonald's confirming that meat from the supplier had been sold to its branches in Japan, according to a Bloomberg report. But all tainted products have since been removed.

In Singapore, Starbucks managing director Jane Lau said the company does not get its supplies from Shanghai Husi or any other Husi company. Separately, a McDonald's spokesman assured customers that it does not import chicken and beef from China.

The latest allegations renew concerns about unsafe food in China following a string of scandals, including fox DNA being found in donkey meat, cadmium-tainted rice and recycled "gutter oil" being used for cooking. In 2008, baby formula laced with melamine, a toxic compound used in plastics, led to the deaths of six infants.

In response to the latest incident, China's food watchdog said on its website yesterday that it has ordered regional offices to carry out "thorough spot checks" on restaurants that have used Shanghai Husi products.

It also ordered investigations into all other China food-production operations that OSI Group had invested in, adding that the case could be handed over to the police if crimes were suspected.

Experts say that while many Chinese look to foreign brands as a benchmark of higher safety standards, the latest incident highlights the difficulty in ensuring quality and safety along China's supply chain.

"Food safety is an issue that all countries deal with. There are always a few cunning businesses that are the black sheep and regulation is not always enough to deal with them," scholar Zhu Yi of the China Agricultural University told The Straits Times.

Still, China's attempts to strengthen food safety by imposing higher penalties for violations, increasing scrutiny on food safety information and raising compensation for consumers in a new draft law are positive steps. This is because the harsher punishments are likely to dissuade some from flouting the law, she added.

The official China Daily also weighed in on the issue in an editorial yesterday, calling for regulators to be given more power and be made more accountable.

"If any evidence shows that they have failed in their duties, they should also be punished in accordance with the law," it said.