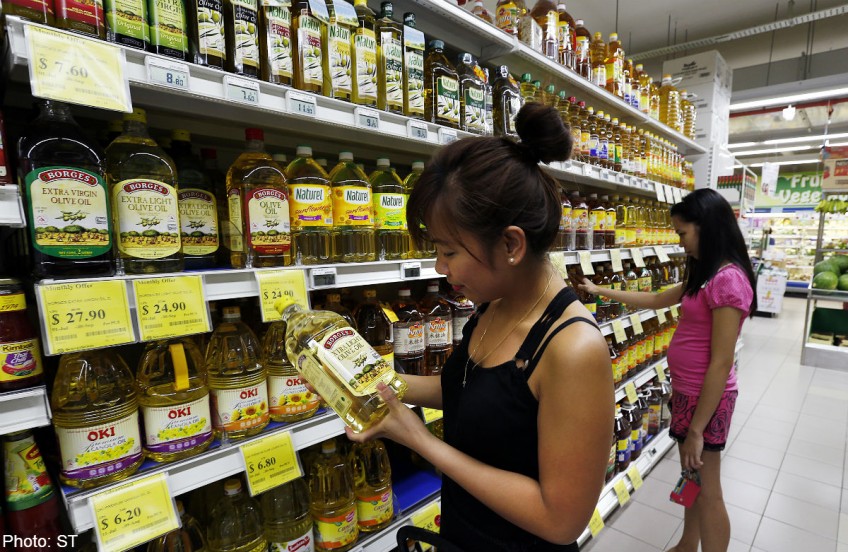 Consumers looking at the healthier cooking oils on display at a Sheng Siong supermarket. Sales of canola oil, soya bean oil and sunflower oil at the supermarket chain rose by 60 per cent last year, compared with that in 2011.

SINGAPORE - Healthier cooking oils, such as those from sunflower and peanut, are getting more popular here.

At major supermarket chains, sales of these products have risen as much as 60 per cent in recent years, as shoppers turn away from palm and hydrogenated vegetable oils, which are less healthy.

Cold Storage told The Straits Times that it has seen a 15 per cent increase in the sales of healthier oils, including olive and canola oils, in the last three years. Over the same period, sales of less healthy options have gone down by 10 per cent.

"We have noticed a shift to healthier cooking oils as consumers become more aware of their benefits," said a spokesman for Dairy Farm, which runs Giant and Cold Storage.

"More discerning and health-conscious customers" are also opting for less well-known variants such as avocado and grapeseed oils, she added.

Oils marked with the Healthier Choice symbol issued by the Health Promotion Board (HPB) contain less than 20g of saturated fat and less than 1.5g of trans fat for every 100g of oil.

Hydrogenated vegetable oil, on the other hand, may be cheaper but it also contains trans fat.

Trans fat raises the level of bad cholesterol and lowers that of good cholesterol, increasing the risk of heart disease.

Higher levels of saturated fat also increase the risk of heart disease, although they raise the levels of both good and bad cholesterol.

Sales of canola oil, soya bean oil and sunflower oil at Sheng Siong rose by 60 per cent last year, compared with that in 2011.

At FairPrice, sales of its oils with HPB's Healthier Choice symbol increased by 10 per cent over the last two years. It added five new types of such oils to its range over that time.

HPB's National Nutrition Surveys in 2004 and 2010 found that the proportion of households that use healthier unsaturated-fat cooking oils increased from 50.5 per cent to 59 per cent over the six-year period.

These oils contain less than 25 per cent saturated fat.

The Straits Times reported last week that HPB will spend millions a year on subsidies to get coffee shops and hawker centres to use healthier oil.

Operations supervisor Lee Kok Kee, who cooks thrice a week, began paying attention to the fat content of oils a few years ago, when his medical report showed that he had high blood pressure.

"I try to look for those with the Healthier Choice logo," said the 52-year-old.