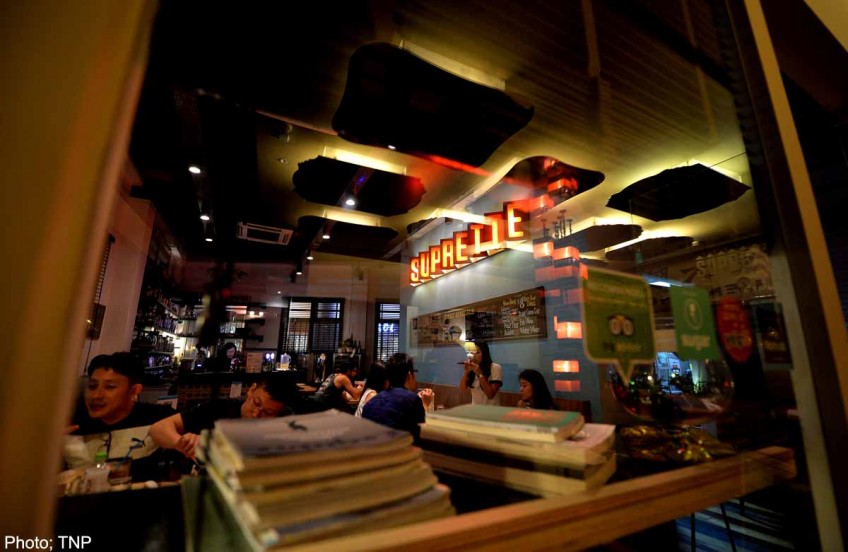 When you think hip joints and thr heartland, Katong, Holland Village and Tiong Bahru roll off the gelato-coated tongue.

The double espresso is jostling for space with "kopi gau siu dai" (Hokkien for black coffee with less sugar) and the Grass-fed Argentinian Ribeye is giving the "mamak" mutton chop a run for its money.

The New Paper on Sunday looks at the new joints, why they choose to move into the heartland and why people frequent them.

Despite having the option of opening Suprette in a place like Dhoby Ghaut, Mr Varian Lim and his two partners picked Jalan Besar.

"Relative to Orchard Road and other central locations, Jalan Besar has cheaper rent," he says.

"We also chose this location for the long-term potential of the area's development and gentrification."

Mr Lim says having Suprette in Jalan Besar (above) saves him about $6,000 a month.

It is barely three years old but has already made a name for itself with its fancy burgers.

Suprette has to compete with local street food, including the famous Chong Pang Chicken Wings and wonton noodles, which are considerably cheaper.

Mr Lim says: "During our dinner hours, we get a mix of locals and expatriates. They also come in for brunch and dinner during weekends."

One such customer is Mr Ryan Chng, 32, who loves the place enough to return about once a week.

"It's reasonably priced. The location gives it a very laid-back atmosphere and the food is great."

It's the second oldest HDB satellite town. Residents are more used to kaya toast and "teh" than artisanal tea.

But that's exactly what The Daily Press (left) at Block 126, Lorong 1, is serving.

The menu has exotic options, ranging from a $12 Babi Pongteh (a Nyonya braised pork dish) sandwich to a $15 House-Cured Salmon.

On weekdays, it's the white collar type who make a pit stop there for lunch. On weekends, young couples frequent the place.

But even the coffee shop uncle and aunty stop for a bite occasionally.

"Some of the stall owners from the food centre patronise us," says The Daily Press assistant manager Tan Mei Chin, 24.

Mr Mervyn Lee, 51, owner of Frozen By A Thousand Blessings (above), a frozen yoghurt store next door, drops by for the Korean Fried Chicken sandwich.

Other hip joints in Toa Payoh include Creamier Handcrafted Ice Cream And Coffee and Moly Cafe.

Happy Days (right) is a bar that used to be the old Bedok Princess Theatre next to Bedok interchange.

The bar was moved from Bishan to Bedok about five years ago.

Mr Stan Lim, director of NTUC Club which owns the bar, says: "The move was also in anticipation of developments in the vicinity, like Bedok Mall and the redevelopment of Bedok Town Centre.

"Most of our guests are in the older age range as Bedok is a more matured estate. They like the convenience of our location and the club's friendly and casual atmosphere."

Bedok has also been jazzed up with Wawawa Bistro (below), a bar by the Bedok Reservoir; and Nahkon Kitchen (below, right), a Thai restaurant at Bedok Avenue 3 that always has snaking queues of diners.