Most S'poreans 'can cope with rising food costs' 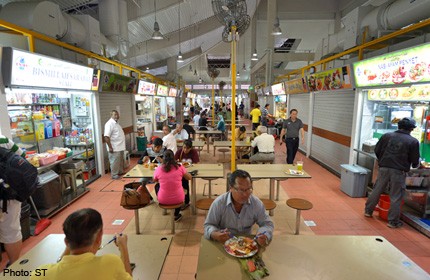 SINGAPORE - Seven in 10 people in Singapore believe they would be able to cope with rising food prices, a new global survey has shown.

They said that their household budgets were flexible enough to handle the higher costs, without them having to significantly shrink spending in other areas.

The online survey by research firm Nielsen polled more than 29,000 consumers globally, with 503 respondents coming from Singapore. It was conducted between Feb 18 and March 8 this year.

A similar sentiment was found in other parts of South-east Asia.

Thailand led the list, with 78 per cent of people saying they were not worried about rising food prices. The figures were 70 per cent in both Indonesia and Vietnam, 66 per cent in Malaysia, and 58 per cent in the Philippines.

Figures were lower in places known for more expensive meals, such as Japan (54 per cent), Britain (44 per cent) and Australia (48 per cent).

So why are Singaporeans apparently unperturbed by the prospect of paying more for their grub?

Economist Shandre Thangavelu said that consumers here "may not have hit the upper threshold of food prices".

"The level of tolerance is still there. People can still get a decent meal for $3 or $4. It is still affordable, so an increase is fine," said and National University of Singapore associate professor.

But he cautioned that the survey results should be taken with a pinch of salt, as the sample size here was small and income levels may not have been factored in.

"The lower-income and vulnerable groups will definitely be affected by rising food prices. We should not generalise because incomes can vary vastly," he said.

"This means that consumers feel less of an impact when food prices rise," he said.

"There is also a variety of food choices here. You have your high-end restaurants, but you also have a wide array of cheaper food options."

The survey also found that if Singaporean consumers were asked to make a trade-off, budgets for non-essentials like dining out, new clothes and accessories, snacking, and recreation and entertainment would get the cut.

Despite the Government flagging food inflation as a key risk in January, it has remained stable at about 2 per cent each month since then.

Food prices here, however, could easily spike as a result of factors such as bad weather or supply disruptions in food-exporting countries. Singapore is particularly vulnerable as it imports more than 90 per cent of its food.

The father of four, who earns $1,800 a month, said: "Every cent matters. We try to eat instant noodles to save money and we go to Malaysia to buy groceries. If not, how to survive?"