My culinary journey across the maze-like alleys of Marrakech 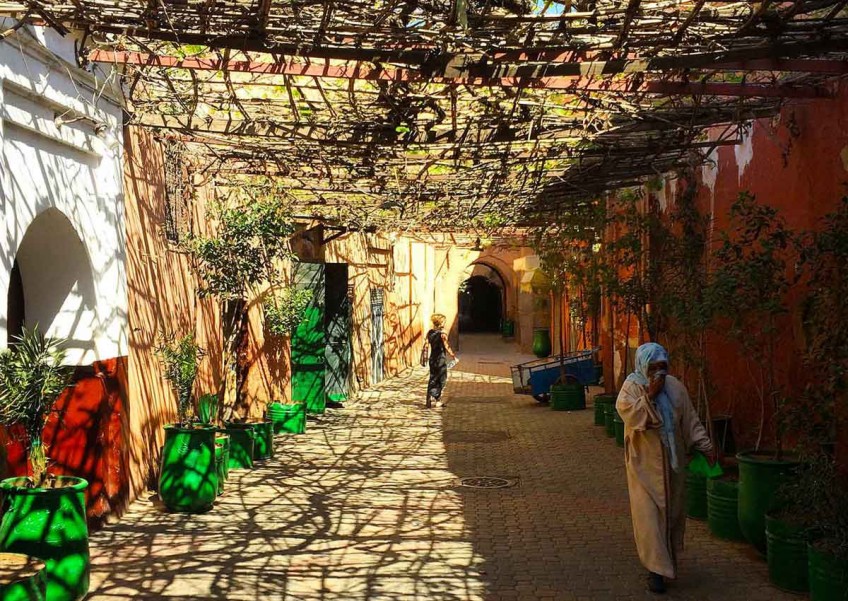 When people ask me if they should visit Marrakech, I quickly reply with an enthusiastic yes, shortly followed by "But it's not for everyone". With its dusty roads and confusing alleys, this historical Moroccan city isn't a postcard of scenic beauty-but it is a place full of character.

The city's charm lies in the maze-like passages of its old district dotted with colourful, antique doors and in the ubiquitous feeling of travelling back in time.

Arriving in Marrakech with three days ahead of us, our gastronomic journey started from our riad (old houses converted into hotels) in the ancient, walled district of the city, known as the medina.

The first night, we opted for a local three-course meal at the Riad Karmela, featuring an array of flavoursome mezze, a lamb tajine-a staple North African Berber dish-and a dark chocolate cake with poached cinnamon apple.

In contrast to the frantic alleys of the medina, the riads were serene sanctuaries. We would start our day with a delectable breakfast that consisted of different types of cheese and fresh bread, and end our evenings with mint tea and Moroccan sweets.

On our first morning, we walked through the alleys crowded with people, vehicles and horse carriages, and headed outside the medina to the Jardin Majorelle. Painted in a striking blue shade-known as Majorelle blue-the garden hosts a museum, gallery, boutique, and a courtyard cafe. It was once owned by the famous French designer Yves Saint Laurent, and the road that the garden is located on is named after him.

As many tourists do, we kept the evening for the Jemaa el-Fna square, where you can hear, see and feel the pulsating vibe of the ancient city. You'll find hawkers, street performers, snake charmers, and even witch doctors at Marrakech's main square. A moment's curiosity comes at the price of a tip, so keep that in mind before pausing in front of any performers.

As the sun sets, Jemaa el-Fna transforms into a food court with every vendor vying for your attention, yelling "Good food, no diarrhoea." A carnivore's dream come true: the food stalls offer all sorts of meat, kebabs, and even sheep's head.

We took a seat at one of the busy stalls and ordered a mixed meat barbeque platter that was served with bread and a spicy sauce. Not the most glamorous, this is one of the most authentic dining experiences one can enjoy in the city.

Jemaa el-Fna is surrounded by entrances to the famous souks of Marrakech that are filled with antiques, Berber jewellery, furniture, carpets, ceramics, coveted pure argan oil, spices, and everything else you can think of.

Although the starting prices might seem like a steal owing to the currency rate, you'd be surprised at how low they go if you have strong bargaining skills-just know that you'll be up against seasoned shopkeepers.

During the walk (factor in some time for getting lost in the winding alleys) from one site to the other, we came across museums and small entrances to some of the best cafes and restaurants. The one that caught our eye was Nomad, a minimally decorated, modern Moroccan restaurant. It was packed at lunchtime, but luckily we found a table on the rooftop where they also provide straw hats for shade from the sun.

We ordered chicken brochette, couscous, and spiced lamb burger with harissa (red chilli paste) mayonnaise, a condiment integral to Moroccan cuisine. Nomad is a model example of how the local culinary scene is melding contemporary cooking techniques with traditional recipes and ingredients.

Another such eatery was the Atay Cafe, which had three terraces. Lounging on the sofas on the rooftops, we could take in the rugged landscape of the medina against the Atlas Mountains as French music played in the background.

The menu had all the staples-tajines, sandwiches, pasta, salads, brochette-but the most delicious part of the meal was, once again, harissa. You can even buy some at the souk to take back home with you.

In the midst of sightseeing, shopping, and getting accustomed to the local cuisine, we squeezed in a few hours of pampering at the stylish spa in La Sultana Hotel. Think calming argan oil aroma, an exceptionally attentive staff, and a gorgeous property highlighting the unique characteristics of Moroccan architecture.

Once we finished getting our treatments, we went to the rooftop of the spa to watch the sun set over the Kasbah Mosque. Regardless of whether a spa day is on your list, go to the restaurant in La Sultana for the dark chocolate ravioli in a Nutella and walnut sauce-it really is as divine as it sounds.

You'll come across more known and bigger eateries, such as the Hotel Restaurant Cafe de France and Cafe des Epices during your time in the old district.

But if you're willing to find an oasis of lush, jungle palms in a narrow street, then keep Le Jardin in mind-the lamb tajine at its cafe is worth coming back for.

Otherwise, you can always take back some street food (I recommend the Msemen flatbread) to the riad and have it with Moroccan tea under the orange trees.