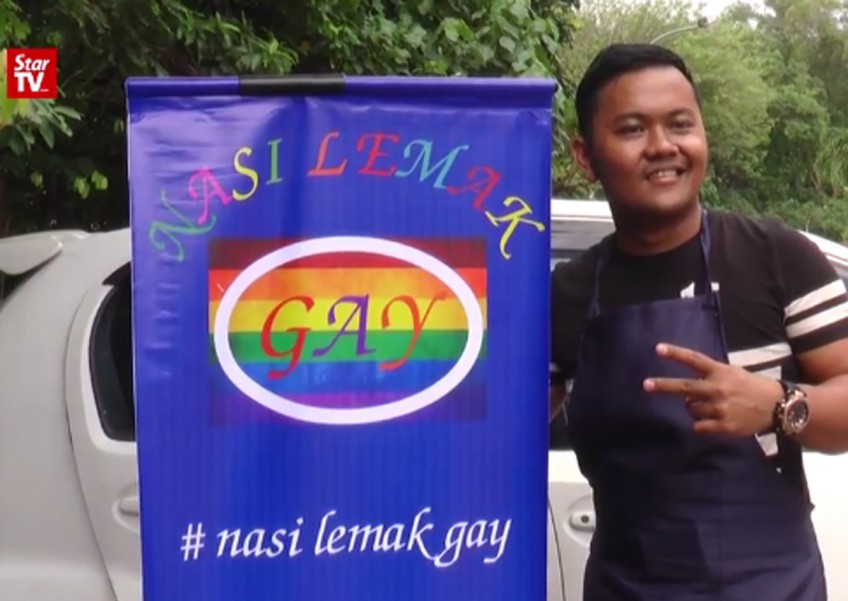 "People are too quick to jump to conclusions. The word 'gay' is not a reference to homosexuality, but an acronym of my shop's name - Gerai Adi Yusuf (Adi Yusuf's Stall)," he told The Star Online in an interview on Thursday.

"This is me, this is my name. It is what I'm known as in the food and beverage industry," said Adi.

The 33-year-old set up his roadside stall at Petronas Taman Segar petrol station in Cheras at the end of January, but only put up the Nasi Lemak Gay banner on Tuesday.

"I set up shop at 7.10am and closed by 8.45am. Somehow, during that short period, someone took a picture of me and the banner and it went viral the same day," he said.

"I woke up from a nap and I had so many messages. I was shocked!" said Adi.

Adi said that he received messages of support from friends and strangers, but also received several hateful ones.

"The attacks were like a machine gun, one after another," said Adi.

"There were messages that says my food is not good or 'nanti makan jadi gay (you will become gay when you eat)'," he said, adding that he would not allow the spiteful comments to affect him.

When asked if he was gay, Adi said that he was not.

"I've been in this industry for so long and I've worked hard. I am proud of what I do and I'm just trying to make a living," he said.

Adi started in the food and beverage line when he was just 16, and has worked as a waiter, chef, promoter, supervisor and manager.

"I've learnt many things and I love to cook. That is why I decided to start my own business," he said.

Since he started his food business two months ago, Adi said that he was very happy.

"I have a lot of freedom and cooking is my passion. I just cook whatever I know how to, and sell it," said Adi, adding that he could sell 30 to 40 packets of nasi lemak a day.

When asked why he decided to name his shop Nasi Lemak Gay, Adi said that quirky names seem to be a marketing trend.

"I don't regret what I did. I believe in what I stand for and I'm doing it for myself. I didn't think that it would go viral," he said.

Adi has also decided to temporarily shut down his nasi lemak stall.

"I am not sure what I will do next. Maybe I will continue without the banner, or I will stop and continue working at restaurants," he said, adding that Malaysians should support local entrepreneurs instead of criticising them.

"I support the idea of people starting their businesses whether they are pondan (transgender), anak dara (virgin), bujang (single) or whatever. It's just a name.

"At the end of the day, it is about the food. If the food is good, people will come back," said Adi.