When you stop by at top shopping malls or other culinary centres in Singapore, South Korea, Australia or Japan and pick durian ice cream -- favourite dessert for many because of its unique state and smell -- you may never think that its basic ingredient was in fact exported from North Sumatra.

Yusfahri said the exported durians were already processed because most of them would be manufactured into ice cream. He said many more Asian countries as well as those in South America had expressed their interest in importing durians from North Sumatra, yet as the supply was limited the province so far could only meet the demand from these 10 countries.

"We are overwhelmed with orders. The problem is in the supply because most durians are still marketed domestically," Yusfahri told The Jakarta Post, last week.

He said durians from North Sumatra had a distinctive flavor compared with durians from other regions. They taste stronger, making them more popular among durian lovers.

Durians in North Sumatra are harvested twice a year, at the beginning of the year and in mid-year. The provincial crop agency records that North Sumatra produced 64,659 tons of durians in 2017 and as of the third quarter of last year it had produced 17,961 ton of them.

According to Yusfahri, the government has been trying to increase the production of North Sumatra durians by distributing durian seedlings.

Read Also
Would you try this? Shanghai hotpot restaurant serves up Oreos boiled in durian soup 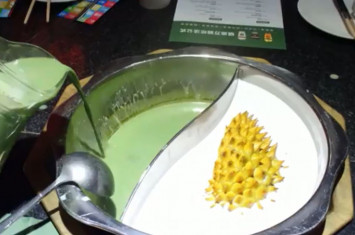 Dairi regency administration secretary Sebastianus Tinambunan said the regency contributed the biggest durian production of 166,900 quintals. He said there were 81,600 durian trees in Dairi, each of which could produce an average of 204.53 kg.

Lukman, a durian trader in Medan, North Sumatra, said his buyers came from various provinces and even from abroad. He said he could sell up to 300 durians a day. "Sometimes, I cannot meet all the demand, especially during weekends," said Lukman, who sells the fruit in the Helvetia area.

"The price doesn't matter here as long as it tastes good," said Lukman, adding that his durians are always sold out regardless of the price.