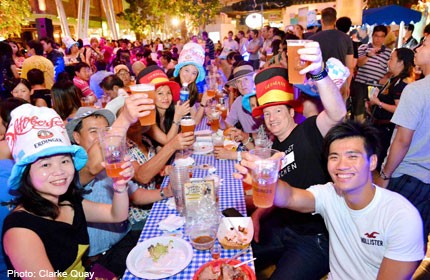 Beer lovers, raise your mugs and say "Prost!" - cheers in German - for you are spoilt for choice at this year's Oktoberfest.

The latest addition is Oktoberfest Asia, a four-day festival of everything Bavarian, from Oct 16 to 19.

It joins close to 10 other Oktoberfest activities here which take place in the September to October period every year, on top of the dozens of Oktoberfest drinks and menu specials to be found in bars and restaurants around the island.

They mark a festival which originated in the German state of Bavaria in October 1810 as part of a royal wedding bash.

Event organisers say Oktoberfest has gained popularity here in recent years as a result of a well- travelled population with a growing interest in craft and speciality beers.

For example, the Swiss Club's Oktoberfest event, the largest here, drew about 2,000 people over two nights when it started in 2000. It now takes place over four nights from Wednesday, with a full day of merrymaking on Saturday.

The event is usually held in early September and has drawn about 10,000 people each time over the past few years.

Likewise, Brotzeit German Bier Bar & Restaurant launched its first Oktoberfest event in 2007 with a crowd of about 1,000. Last year, close to 5,000 people turned up and the restaurant expects more than 6,000 at this year's affair, which will be held over two weekends later this month.

Noting the growing interest in Oktoberfest, Brotzeit's chief executive, Mr Aidan Hay, says: "More people are well-travelled and are aware of the popularity of cultural festivals such as Oktoberfest."

The people behind the inaugural Oktoberfest Asia say theirs is a more authentic version of the Bavarian festival.

It is organised by Mr Matt Bennet, 45, co-founder of Beerfest Asia, a four-day industry event launched in 2009, as well as Mr Joel Thong, 32, and Mr Ian Lim, 35, partners of the home-grown beer distributing company Dreamfields.

"Singaporeans are more discerning now. They are drinking three pints of premium beer instead of downing 10 pints of Tiger, and that thinking extends beyond beer," says Mr Thong.

"They are always looking for something different to do on weekends. There are only so many times you can go to the restaurants or go shopping, so they are more selective and willing to spend on special events."

Oktoberfest Asia will be held at Marina at Keppel Bay, with food from German restaurants Paulaner Brauhaus and Werner's Oven.

The band, adds Mr Thong, are the house band for the Hofbrauhaus beer halls in Munich that play at Oktoberfest every year.

"We wanted to bring an authentic Oktoberfest event to Singapore, with real German food and beer," adds Mr Lim.

As per the tradition in Germany, Oktoberfest Asia will take place in and around a large marquee, which can fit up to 2,500 people a night.

The cost includes a sit-down dinner of a Bavarian main course such as roast pork knuckle and bratwurst with sauerkraut, a pint of beer and a souvenir beer mug, or stein which is made in Bavaria, as well as entertainment.

Additional food and drinks, including sausages, pretzels and about 10 types of Bavarian beer, wine and Jagermeister, a German herbal liquor, will also be available for sale.

The organisers say having only Bavarian beer on tap sets the festival apart from other Oktoberfest events.

"Having Tiger or Erdinger at Oktoberfest is as wrong as not having a turkey at Thanksgiving," says Mr Lim of the two beers which typically feature in Oktoberfest celebrations in Singapore.

The brews they will serve are from some of the oldest breweries in the world, such as Weihenstephan brewery founded in 1040 and Weltenburger Kloster founded in 1050, and will be available starting at $12 a pint.

There will also be limited-edition beers, such as the Cuvee Barrique, a wheat beer aged for eight months in a pinot noir barrel, which costs $40 for a 750ml bottle.

Because of its heavy Bavarian focus, Oktoberfest Asia organisers say it is an event that complements, not competes with, Beerfest Asia.

Beerfest, which is also a ticketed event, is typically held in June and attracts a younger crowd in their 20s, while Oktoberfest Asia hopes to attract an older, more affluent segment.

Launched here in 2009, this year's Beerfest Asia took place over four days at Marina Promenade and drew more than 25,000 people who came to sample more than 400 beers and enjoy live entertainment.

Mr Bennet says: "Beerfest is more of a trade event where restaurant and bar owners can try the latest beer offerings. Members of the public who attend tend to be younger people who go to party.

"Oktoberfest Asia starts with a sit-down dinner with friends. It's for a more mature audience."

Mature does not mean sombre, though, and the organisers have spent more than $500,000 to bring the usually raucous Oktoberfest experience to Singapore.

Picture waitresses dressed in dirndls - traditional Bavarian dresses - delivering roast pork, goulash and half-litre steins of Bavarian beer to revellers who are clapping and dancing to an oompah band (a traditional German music group named for the sounds made from its mix of brass instruments) flown in from Munich.

There will be performances by local drums and rhythm band, Wicked Aura, as well as traditional Bavarian games such as beer-sliding, where a pint of beer is slid from one side of a wet table-top to the other end for the participant to grab and chug.

You can also expect games such as foosball, a golf simulator and a competition to see who can pull a 1.5-tonne truck over 20m in the shortest period of time.

German football legend Dietmar Hamann, 40, is the spokesman for the event and will be here to greet fans and sign autographs on all four nights.

"We want people up and partying, dancing on the tables," says Mr Bennet.

"It's a celebration of life, a time for people to stop and enjoy their time with friends, to let their hair down and to be a bit silly."

The German restaurant's annual Oktoberfest event is one of the biggest here. To be held over two weekends, it is expected to draw more than 6,000 people to its VivoCity branch.

German band Anton And The Funny Guys will provide entertainment, as will patrons who compete in Oktoberfest carnival games.

The Guzzler, The Builder and The Server are among the games which test participants' strength, endurance and ability to hold their beer.

Qualifying rounds were held on Wednesday and the finals will be held on Oct 17, from 7.30 to 9.30pm. The winner of each category gets an iPad Mini and $100 worth of Brotzeit vouchers.

Seasonal Oktoberfestbier from German brewery Paulaner Brauhaus will be on tap ($12.50 to $14.50 for half a litre). On top of the regular menu, an Oktoberfest meat platter of sausages, steaks and traditional sides, which serves four to six, is also available for $168.

The German cafe has forgone the traditional oompah band in favour of local musicians, so it has named its first such event Beerfest instead of Oktoberfest.

Still, many Oktoberfest elements remain. There will be a buffet of German favourites, such as sausages and pork knuckles, and free flow of German beers, such as Schwaben Brau, of which the cafe is the sole distributor in Singapore. There will also be German house pour wines and games such as beer pong and a beer stein holding competition - to see how many beer mugs one can carry.

At $50, the all-you-can-eat-and- drink event has proved very popular, and has sold out its first run which started yesterday and is on until Sunday.

The cafe has extended the festival for another weekend, from Oct 11 to 13. There are about 110 seats for each night and tickets are going fast - about 130 tickets are still available for the second weekend.

Oktoberfest, which has been celebrated at Clarke Quay since 2010, is now one of its signature events besides Halloween and the New Year's Eve countdown party.

About 1,000 people are expected over the two-day event. They will be entertained by live oompah and rock music as well as carnival game booths.

Of course, it is not Oktoberfest without beer and food. Six booths by Clarke Quay pubs and F&B operators, such as Fern & Kiwi and The Pump Room, will provide German food such as braised pork belly with sauerkraut ($10) and Erdinger beer ($14 a pint).

Where: Central Square Fountain at Clarke Quay
When: Next Friday and Oct 12, 7 to 11pm
Admission: Free
Info: Go to www.clarkequay.com.sg/oktoberfest/

The German brewery is one of only six in the world that can produce official Oktoberfest beer under the original festival's criteria, which stipulate that the beer should contain at least 6 per cent alcohol by volume and must be brewed within Munich.

While the Singapore branch of this famous brewery is well outside the city limits, the resident brew master abides faithfully by the other criteria when producing the fresh Oktoberfestbier here.

All 6,000 litres made for Paulaner's annual week-long Oktoberfest are usually consumed by the end of the celebration.

Where: 9 Raffles Boulevard, 01-01 Millenia Walk
When: Ends tomorrow at 2am
Admission: Free
Info: Go to www.paulaner-brauhaus.com

For a more low-key celebration with local flair, head to Quentin's Restaurant at the Eurasian Association for its annual Oktoberfest bash.

Held on the premises since 2010, it sees about 100 people attending the party each year and enjoying live music by local bands, drinking contests and German games such as a stein-hoisting competition and a Kartoffel (dumpling) race.

Participants dine on a buffet selection of German and Eurasian food. This includes a variety of sausages, ham and pretzels, as well as chicken devil curry, pork roast beef and seh bak, a pork belly and pork ear stew.

The first pint of Red Rock is included in the cost of the buffet, and you pay $10 a pint for subsequent Red Rock or Erdinger beers.