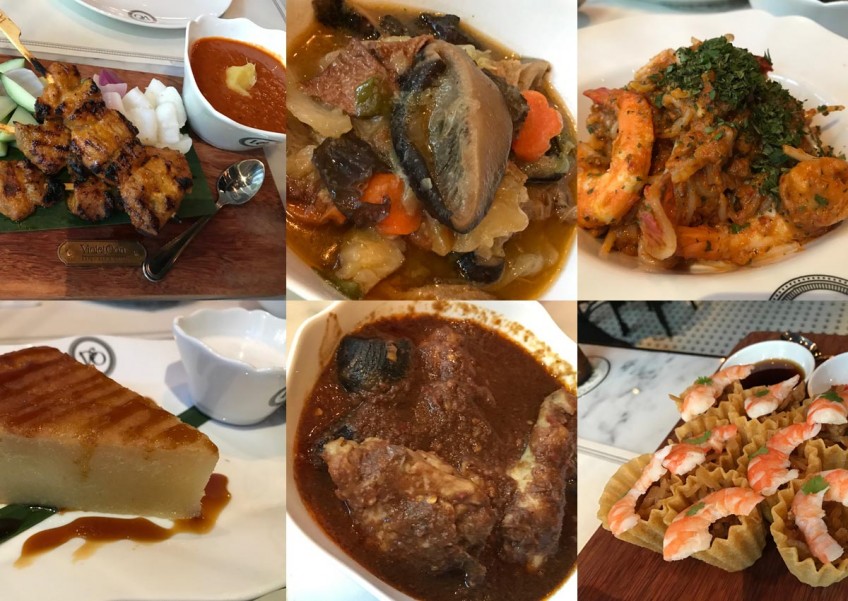 Is satay a kebab by another name?

And if so, can it be priced as high?

Such is the question when eating hawker food in a restaurant setting.

Now, we're eyeing the S$16-for-three sticks of Hainanese (not Iberico) pork satay in front of us with the same entitled sneer reserved for foreign chefs who try to cook chilli crab.

If we had a ruler, we would have measured the pork's thickness, run out to the nearest Greek restaurant, and cross-reference its size and price with an order of lamb cubes on a stick.

We know about the 30 per cent food cost rule, and that no 50-cents-a-stick satay man with a hibachi and straw fan is a match for that fancy grill set up at Violet Oon's new satay bar.

If the thought of paying more than S$50 for a dozen sticks of chicken, pork, beef or tripe satay does not rip its way through your tender memories of Satay Club or primitive understanding of fair pricing, then order away.

It certainly doesn't seem to bother the well-dressed hordes who fill up the latest eatery in Peranakan stalwart Violet Oon's burgeoning food empire - it's her third since joining hands with investor Manoj Murjani, former co-founder of TWG Tea.

Where she was once the go-to representative of Nonya cuisine, she is now full-fledged chef-entrepreneur, pushing out formulaic Asian cuisine wrapped in a convenient Peranakan label.

Like the satay - the Nonyas have their own version of it, but in Singapore, we grew up with the Malay version or, as the menu credits, Hainanese.

Once you get past the whole keeper-of-heritage whimsy, it's easier to appreciate the concept of Ms Oon's eateries - glossily dressed up like a TWG tea salon mated with a Peranakan cliche.

It's a slick eating place presenting serviceable food and the whole package of ambience.

The pork satay in question has the adequate hit of fragrant spices on first bite, but the lean tenderloin dries out really quickly even with the bits of fat in between.

The peanut sauce is the real star - you get more than you need of a rich, spicy, sambal chilli-hued, chunky gravy topped with grated pineapple.

Tripe Satay (S$15) catches our eye since it's been a long time since we've seen that. We smell it coming - the distinct offalness from the overly soft pieces of simmered honeycomb tripe decorated with charred lines.

It's a little on the mushy side but again, the sauce - a different gravy that's coconut milk-enriched and lemongrass-scented - stands out.

A squeeze of lime and the sauce mitigates the gaminess nicely.

The fried baskets lose their crispness from being pre-filled for convenience, but otherwise they're perfectly edible.

Although the chicken in the Buah Keluak Ayam (S$23) tastes more like a transit visitor than long-term resident in the mild, tangy gravy, we're happy that they use only drumstick and thigh meat, so there's no fiddling with tired-out bony breast bits.

The buah keluak is cooked as it is, so it's pure bitter flesh that you scoop out, not a loving mix of meat and nut.

The Chap Chye (S$15) has been left to simmer too long - the cabbage leaves almost dissolve into our rice - but it is nice and homey, a mix of mushrooms, carrots and tofu skin braised in broth with just a light touch of taucheo or preserved soy beans.

Our formerly favourite Dry Laksa (S$22) is too heavy-handed here, with the noodles suffocating in an over-zealous avalanche of fried spice mix.

Since we discovered a more balanced, nuanced version at a little eatery called Now Noodles, this is too in-your-face for us.

Dessert-wise, the Chendol With Durian Pengat Sauce (S$15) is just maddening to eat.

Try navigating your way around a parfait glass packed high with shaved ice, red beans and chendol "worms", topped with a quenelle of mashed durian.

Ingredients fly all over till we don't know if they're meant to distract us from how tasteless everything is - from the undercooked, bland red beans to the supposedly gula melaka-flavoured ice that made us give up and ask for some actual syrup instead.

Kueh Beng Kah (S$10) is a steamed tapioca kueh that's usually served in more dainty portions, not in an ungainly, custardy slab that gives it a rather squeamish texture.

Ms Oon's restaurants have hit on a winning formula of heritage and glitz.

There's also a manufactured feel about it, from the glib service to the lack of charm or heartfeltness.

But charm and heart do not make a scalable business. This does.

WHAT OUR RATINGS MEAN

Our review policy: BT pays for all meals at restaurants reviewed on this page. Unless specified, the writer does not accept hosted meals prior to the review's publication.

This article was first published on March 24, 2017.
Get The Business Times for more stories.