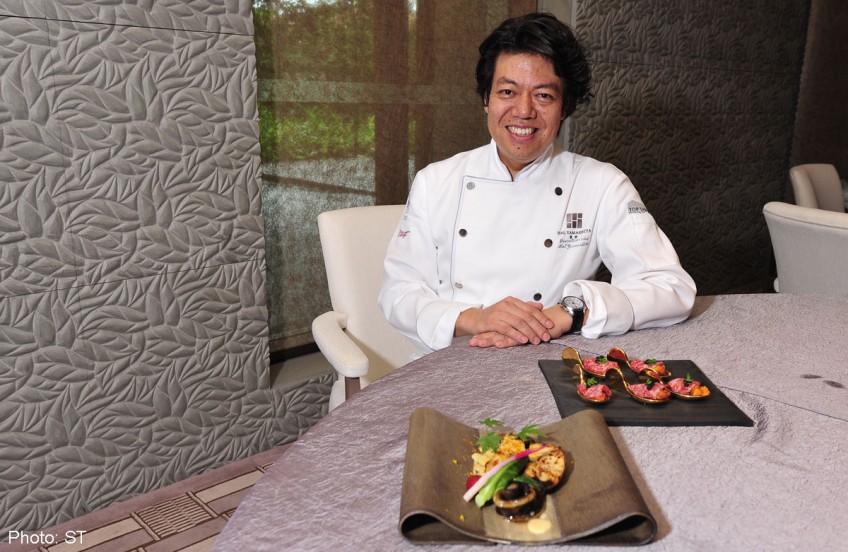 Popular Japanese chef Hal Yamashita has wanted to open a restaurant in Singapore ever since he cooked here some four years ago.

The Kobe native, 45, finally opened his first overseas restaurant, Syun, at Resorts World Sentosa's Festive Walk two weeks ago. He runs nine restaurants in Japan, from Osaka to Kobe, including a high-end eponymous restaurant in Tokyo.

His dinners were oversubscribed when he cooked here as a guest chef for the annual gastronomic festival, the World Gourmet Summit, in 2010. Since then, he says he has been approached more than 40 times to open a restaurant here.

It took this long, he says, because he could not find the right location or partner.

On the choice to open at Resorts World Sentosa, he says: "I like the resort because it attracts people from different countries and I want the restaurant to appeal to everyone. I just want to make people happy."

Syun is headed by Japanese chef Norihito Saki, 40, who has been a chef with the resort since 2011. Chef Saki, who has a background in fine dining at top hotels in Japan, spent a month cooking with chef Yamashita in August last year.

The restaurant's lunch sets start at $18++ for a sushi-roll set. Expect to tuck into dishes such as Spicy Wagyu Beef Yakiniku Roll ($28), Unagi and Foie Gras Teriyaki Jyu ($37) and Chirashi Sushi ($32). The menu also has options for children.

For dinner, a la carte items start at $4++, while a five-course meal starts at $78++ a person and a seven-course meal at $128++ a person. The sets and a la carte menu include items such as chef Yamashita's signature Sea Urchin Rolled By Wagyu Beef - sea urchin encased in slices of wagyu beef topped with caviar; and Grilled Cod with Saikyo Miso, Yuzu Miso Sauce and Dried Mullet Powder (see side story for recipe).

Syun also offers a Yamashita-style sukiyaki - where diners dip wagyu beef in sea urchin instead of raw egg. This dish is available only in Singapore.

Known for nouvelle Japanese creations that marry traditional Japanese techniques with modern combinations of ingredients and presentation styles, chef Yamashita says he is unfazed by the myriad Japanese restaurants here.

The chef, who is married to a housewife, 38, and has two children aged eight and 10, says: "I don't see other Japanese restaurants as competition because I will be serving something different."

The chef is also well known for cooking with spring water from Kobe, which he bottles and sells at his restaurants in Japan. So particular is he that four years ago, he transported Kobe water to Singapore just to make dashi.

Syun, however, will be using filtered local water instead.

Chef Yamashita, who is likely to be in town to check on his restaurant here at least once a month, says: "Singapore water is safe. Water is very important in Japanese cooking. To keep costs down for the casual restaurant and make it more affordable for everyone, we have decided to run the water through an American water filter. It is still very much in line with the spirit of my cuisine."

While the restaurant will use top Japanese ingredients such as Hida beef from Gifu prefecture, it will also use produce from around the region, including kailan from Thailand.

Born to izakaya restaurant owners in Kobe, the chef has been cooking since age nine. A literature graduate from the Osaka University of Arts, he worked at his family's restaurant for seven years. He later worked in sake sales for beverage conglomerate Suntory, after which he went on to broaden his culinary horizon by working at restaurants in cities including Los Angeles, Melbourne and Kyoto.

He opened his first restaurant in Kobe when he was 33 and created his signature sea urchin beef roll some 12 years ago. He plans to take over his parents' Kobe restaurant, Nadaban, later this year as they are getting on in age; his father is 75 and his mother is 68.

He says: "I will keep the name of the restaurant but put my spin on it. It will be my 10th restaurant in Japan."