Room for some spillage at the riverside 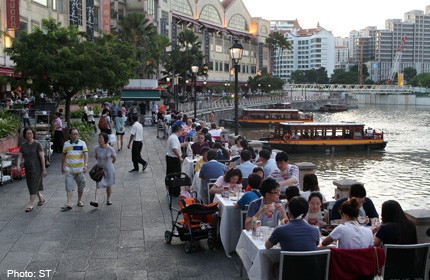 SINGAPORE - First they giveth, then they taketh away. And then they say they always giveth, but only in some places.

Getting whiplash yet? I have come down with a bad case of it since reading about the Urban Redevelopment Authority's new guidelines for riverside dining at Clarke and Robertson quays.

Recently, the URA conducted a two-year review of outdoor refreshment areas along the Singapore River in a bid to enhance visitors' experience.

Under the new rules, some drinking holes and restaurants will have to remove the tables they have set right by the river. Outdoor kiosks will also have to go.

But the eateries at Riverside Point, such as Brewerkz, Jumbo Seafood Restaurant and Cafe Iguana will need to leave a 6m-wide path for pedestrians.

The outdoor dining areas at Boat Quay are not affected for now, but the situation there is under review.

After reading about the changes, I was surprised by just how emotionally involved I became. I suppose I feel I have some vested interest in this.

As a housing reporter in the mid to late 1990s, I attended briefings by the authority and wrote reports on its painstaking efforts to bring the riverbank back to life. There was the $100 million project to rebuild and fortify the river wall, and a $2.35 million project to prevent flooding, both completed in the late 1990s.

The URA also created a 6km promenade so that people could walk up and down the river on both sides, uninterrupted by traffic. Planners also wanted additional landscaping along some parts of the promenade to create different moods.

New foot bridges, open spaces and road improvements were also on the cards.

It has been thrilling to see how the improvements have shaped the way residents and tourists enjoy the river.

Now people can not only walk up and down the river, but also cross it at more points. They can also make use of public seating to hang out at the quays and soak in the atmosphere. Or they can use an outdoor table for a meal or drinks with friends.

Although my friends and I used to joke that only tourists and ang mohs (Caucasians) would sit outdoors, we have been proven wrong. Now everybody does it to enjoy the breeze at night or to just people-watch.

Life by the river is tranquil in parts and lively in others. The different moods the urban planners wanted to create have become real.

The outdoor kiosks also draw people. Those who prefer not to dine in the restaurants riverside can still find some place to sit outside and eat while enjoying the atmosphere.

But here is the thing with buzz: It has to happen organically and sometimes, it is messy.

One URA official said last week: "Over time, we note there has been considerable spillage of tables and chairs, limiting public access to the riverfront and obstructing views of the river.

These were taken into consideration during the latest review."

The approach is hard to understand.

Why allow waterside dining at some spots but not others? How would taking away the kiosks enhance visitors' enjoyment?

If the concern is the obstruction caused by tables and chairs, perhaps it would be better if the authorities decided instead how many tables and chairs can be placed at each location. This seems a better way of dealing with the problem than a blanket ban.

With 6km of riverside promenade, who is complaining about obstructed views of the river?

The new guidelines do not seem prompted by concerns about safety sparked by past reports of people falling into the river after heavy drinking. Indeed, they are designed to allow members of the public to get closer to the river without restaurant diners getting in the way.

There is also Boat Quay. Who knows what URA's scrutiny might throw up there? Take those outdoor dining areas away and watch the quay wither and die.

Much as I dislike the touts (although there seems to be fewer of them these days), I have to admit that I like the energy of the place. It always seems festive.

All that work to make the river an exciting place has paid off. It is the best kind of reward, creating spaces so inviting that businesses want to open along the river and people want to gravitate there.

Anyone who has walked through the buzzing quays at night, especially on Fridays and Saturdays, will wonder if the new rules will suck the life right out of some stretches of the river.

After the review of the quays, what will come next? Will the authorities start to look at the obstructions created by tables and chairs in Geylang back alleys where I enjoy having zi char meals on cool evenings?

That would be a real pity. Eating seafood hor fun in a Geylang back alley is one pleasure of living in Singapore that I do not want to give up.

Other eating areas with views might also come under scrutiny. There is Quayside Isle at Sentosa, a long stretch of restaurants with outdoor seating. Diners inside and out have wonderful views of a marina filled with yachts. It is gorgeous there in the evenings, sitting at a tapas restaurant sipping sangria and gazing at the moon. Even on my visits there at high noon, the outdoor tables are taken up.

People have embraced new ways to live and enjoy life in Singapore.

I will never be able to afford to live on Sentosa, but for the price of a meal or a cup of coffee, I can go there and get a glimpse of how the top 1 per cent live.

At the Singapore River, I can watch kids playing and couples young and old holding hands. I think about all the work that has brought us this far and marvel at how a once dirty river was cleaned, its banks spruced up, and life brought back.

Some of it remains untidy, but the messiness is one reason Singapore is so exciting right now.

I could not have imagined all this as a housing reporter. But I can see it now as a food journalist trying to keep up with the vibrant dining scene here.

It is wonderful. What's a little spillage?