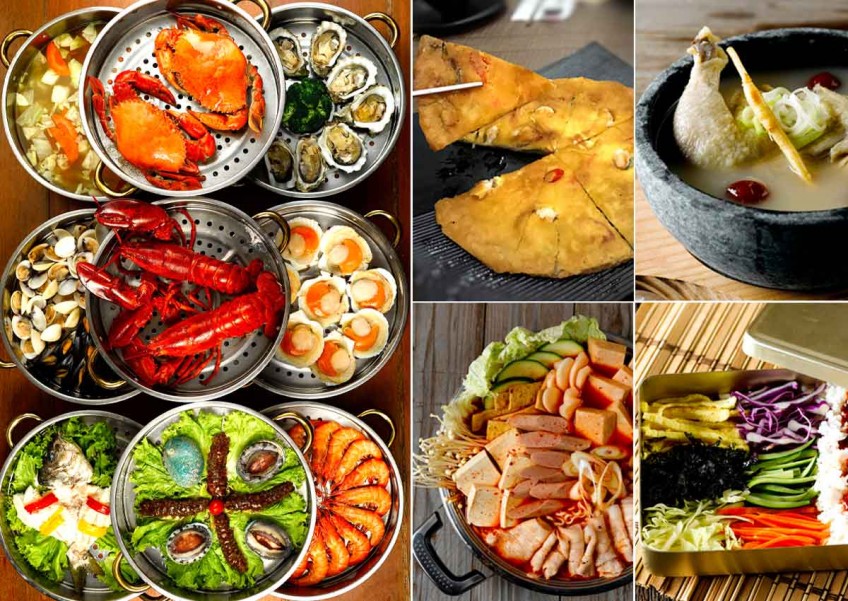 The Korean food invasion continues with K-Tower at Amoy Street.

It is fighting this battle with an army stew, ginseng chicken soup and its most formidable weapon - steamers stacked about a metre high.

This tower of seafood is one of the biggest fads in Korea and is starting to gain traction in Singapore too.

It's a simple concept: Steamed seafood served in a new way.

The seafood is pre-planned but you can add on from the a la carte menu, or custom-build your own tower.

My experience with the nine-tier one ended with me being nearly unable to walk. I love seafood, especially if it's fresh, steamed and simple. There were items such as Boston lobsters, Sri Lankan crabs, Australian abalones, white clams and Canadian oysters. I managed to tick off all my requirements here.

The tower is not the only thing here. It is clearly the draw, but the sides are just as good. The Seafood Pancake ($14.90) worked because it was crispy and flavourful.

The ginseng chicken soup ($17.90) didn't break new ground but something as comforting and traditional as this does not need to be a trendsetter.

The portion is good for sharing because there should be enough chicken for three. You can also choose to use the soup as the base of the tower at an additional $20.

When you order this for lunch, it will get you a drink and a side dish as part of the set lunch. It is available from 11.30am to 2.30pm.

The Shake Shake Rice Box ($9.90) can come across as gimmicky. It is basically bibimbap served in a lunch box, and you get a bit of exercise with it. You need to shake the box to mix the ingredients up.

It's fun and the dish is above average, though you'll remember the shaking more than the actual dish.

I love Army Stew ($26.90 for two) but the version here didn't do it for me. The spice level overwhelmed and anyway, whatever you get here will not match up after the fresh and glorious seafood meal.