In the soup for exotic dishes 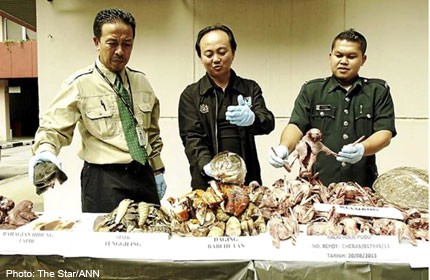 MALAYSIA - An eatery in a Kuala Lumpur suburb has been busted for allegedly offering exotic dishes such as tapir and bear flesh.

"The animal parts were found in the kitchen and freezer of the restaurant during a raid by Perhilitan's wildlife crime unit," said the department's enforcement director, Mr Abdul Kadir Abu Hashim, during a press conference on Wednesday.

They will face trial on Sept 19.

The case falls under Section 68(1)(b) of the Wildlife Conservation Act 2010, for keeping any part of a protected species without a permit.

Those found guilty of this offence can be fined up to RM100,000, jailed up to three years or both.

Mr Abdul Kadir said that the eatery was under observation by Perhilitan officers for two months before the raid, The Star reported.

He said: "The demand for the dishes is high. The average price of an exotic dish sold by the shop is about RM60.

Mr Abdul Kadir added that four eateries in Kedah were raided for similar offences, with similar seizures made.

"There have been 78 cases involving wild boar meat, five involving bats and four involving tapir parts reported since 2006," he said.

The illegal wildlife trade in Malaysia is rising at worrying levels, despite stricter enforcement and heavier penalties.

Greedy traffickers who gain huge profits from the cruel and unethical trade are focusing on Malaysia as it is among the few countries which still has tigers, elephants, sun bears, pangolins and other sought-after species.