There's more to Malaysian food than just satay in Beijing 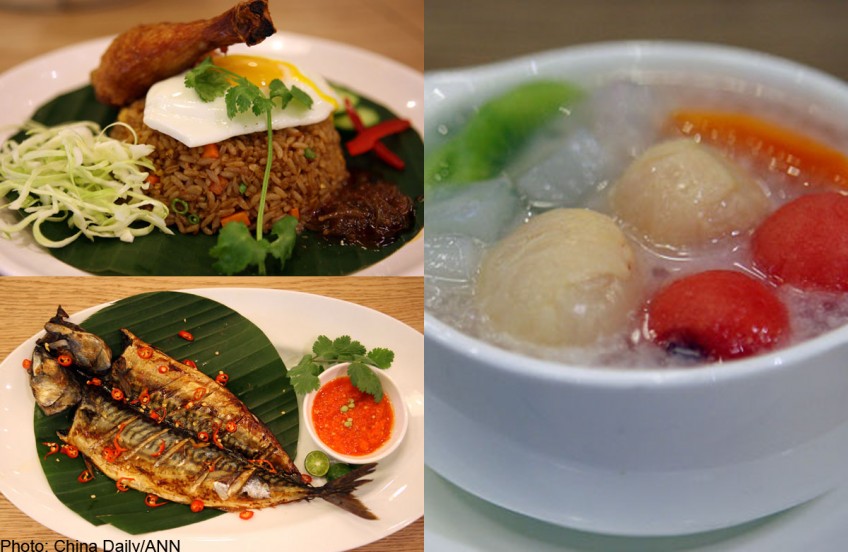 The latest evidence of Malaysian food's strengthening presence in China: the arrival of the new PappaRich restaurant at the Ikea store in Beijing's Daxing district.

Established in Kuala Lumpur in 2005, the popular chain now has more than 70 outlets in its home country, plus cities from Singapore to Australia, the United States and Britain.

In 2013, Chinese restaurant group Tang Palace－after forming a joint-venture subsidiary with PappaRich－brought the brand to the Chinese mainland, opening the first three outlets in Shanghai.

The Beijing branch is the fourth.

On a recent Monday lunch visit, I go to the eatery and find quite a few tables already taken, even though there are few people visiting Ikea at the time.

Restaurant manager Jiang Jinling tells me that all the dishes are prepared by traditional methods to ensure the authenticity of Malaysian taste.

Many of the ingredients, including sauces and tropical vegetables, are imported from Malaysia, she adds.

After asking her advice, I pick several of the restaurant's flagship dishes from more than 120 choices, and they all turn out to be remarkably delicious.

I start with the French toast, because it looks golden and inviting.

Each slice of bread toasted with egg is about 3 centimeters thick, sliced with a pocket to be stuffed with peanut butter and kaya, Malaysian coconut jam made of pandan and sugar.

The first bite combines the feel of the soft toasted bread with the crunch taste and nice aroma of peanut butter, then an aftertaste of kaya. I can't stop eating it.

The restaurant's signature drink, litchi soda, is a perfect match to the French toast.

Fresh litchi, cucumber slices and mint leaves, which float beautifully among crystal ice cubes, have been steeped in the soda water. The drink nicely balances sweet and sour, making it enjoyable and refreshing.

One of my favourite Malaysian dishes is chicken and beef satay. The delicacy of seasoned, skewered and grilled meat is very popular in Malaysia, where chicken and beef are the most common meats on menus.

The texture of the meat is critical to the satay's taste, and the skewered beef at PappaRich is very good. Each slice is soft and chewy, under the coating of a sweet, dark and mildly spicy sauce.

But the chicken satay fails me, seeming too soft. It's so unappealing that I allow it to get cold－which only makes it worse.

At PappaRich, I like the curry chicken laksa very much. The rice-noodle broth is a combination of Chinese and Malay cuisine, and has a long list of ingredients, such as chicken, shrimp, tofu puffs, beans, eggplant, chili, mint leaves and shallots. The hot chicken soup is poured over cooked rice noodles, which brings out a rich mixture of spicy, sweet, sour and salty tastes.

The "sultan fried rice and signature chicken leg" is also a must-have at PappaRich. The combination delicacy got its name because it was once served to the ruler of Sudan, according to manager Jiang.

It's a delight to the eyes, as the brown fried rice and grilled chicken leg are served with a white fried egg, and light-green lettuce slices, all presented on a dark green background of plantain leaf.

The rice doesn't seem very special, although the chicken leg is tasty from the skin to the inside. It's large, so it easily appeases my hunger for meat.

The chicken leg is salted and seasoned for many hours before grilling, which makes the bird's skin crispy and the inside delicious.

Among the PappaRich dessert selection, pandan milk pudding and coconut milk pudding are the most popular for their original Malaysian flavors, Jiang says. Mixed fruits with sago and black sticky rice in coconut milk are also popular. Late this month, the restaurant plans to add new beverages and desserts to its menu, she adds.

And, why is it called PappaRich?

Founder Rich Tan writes on the company website that a memorable name is important for a brand's success. "Everyone loves the word 'pappa', someone whom you can easily relate to and remember whilst being close to your heart." As for the word "rich", "Doesn't everyone want to be Rich, especially a rich pappa"?