Trip to France for winning chef 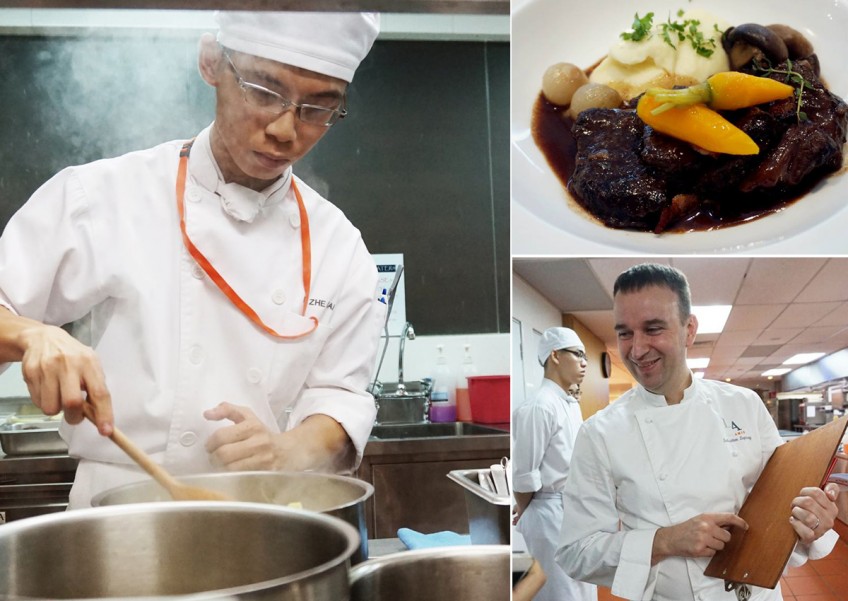 Clockwise from above: Zhe Kai won this year’s award at the LAwards Culinary Challenge where the Classic French theme included beef bourguignon as the main dish; accompanying him on his five-day trip to France will be chef Lepinoy.
Les Amis Group LAwards Culinary Competition Facebook page

Nineteen year-old aspiring chef Poh Zhe Kai has never been to Europe. But next week, he will be treated to a five-day trip to France, where he will dine at some of the most prestigious Michelin-starred restaurants - all-expenses paid.

He went up against four other competitors from various local culinary institutions such as Shatec and the Culinary Institute of America (CIA) in the final held on Aug 29, where they each had to prepare their interpretations of three dishes according to this year's Classic French theme - a French onion soup appetiser, a beef bourguignon main dish and a floating island dessert of meringue and crème anglaise.

The competition experience "trains me to maintain my composure when under pressure in future, as well as to build and improve on my basics and techniques", says Zhe Kai, who represented Temasek Polytechnic in the Culinary Challenge.

This Culinary Challenge is run by the Les Amis Group, along with the Singapore Tourism Board, the Workforce Development Agency and the Singapore Chefs Association (SCA). Going along with Zhe Kai on the trip is last year's winner, Raphael Sim, 24, from CIA, and Les Amis executive chef Sebastien Lepinoy who will be playing host to the two young winners.

Chef Lepinoy says: "I would like to show and explain to them more about what French cuisine and fine dining is all about. Given the amount of experience and knowledge accumulated in this industry now, I hope I would be able to pass on information that would be useful to them."

The restaurants they will visit include three-starred Ledoyen in Paris, two-starred L'Oustau De Baumaniere in Avignon and three-starred Le Petit Nice in Marseille. Other trip highlights include breakfast at Pierre Herme, dinner at a traditional French brasserie, Le Ballon des Ternes, and a visit to an olive oil factory in Provence.

Chef Lepinoy was also one of the judges in the qualifying round of the competition, along with four other chefs such as Julien Royer of Odette Restaurant, and Eric Teo of the SCA and ET Culinary Arts.

The final round was judged by a separate seven- man panel including chef Andre Chiang of Restaurant Andre, chef Willin Low of Wild Rocket and Desmond Lim, chairman of the Les Amis Group.

According to chef Lepinoy, the focus of the qualifying round was on basic techniques and skills in the kitchen, while the final round tested the participants in creativity and innovation. "I judged them based on their techniques but also looked into their organisation and hygiene in the kitchen as well as the final taste and presentation of the dishes."

Matthew Nonis, chairperson of the Les Amis Group LAwards Culinary Challenge Committee, says the idea for the competition was first mooted last year in conjunction with the 20th anniversary of the group. It has been well-received so far, so they are considering expanding it to include regional culinary schools in future.

He adds the idea is to "germinate interest in the culinary profession, and in so doing, help grow the pool of young local talent that will go on to join the F&B industry"

This article was first published on September 18, 2015.
Get The Business Times for more stories.