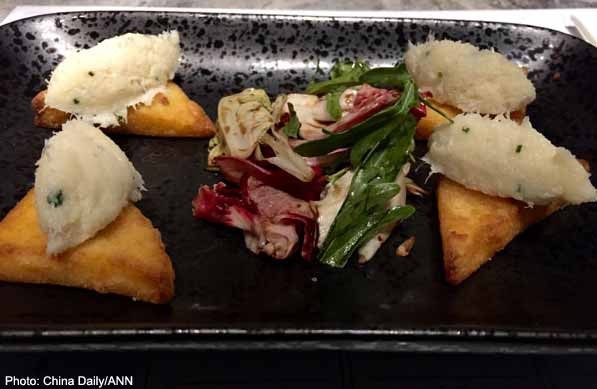 Despite the ancient city-state's star status as the grand terminus of the Maritime Silk Road, Venice has not left much imprint on the Italian food scene in China. While the flavors of Tuscany, Rome and Sicily have become commonplace, the culinary legacy of Venice struggles for some limelight.

In Hong Kong, Sepa is trying to change that. The name means "cuttlefish", and we were naturally anticipating a night of great seafood.

But long before we could pop a succulent morsel of squid in our mouths, we became entranced by the Silk Road lore at the bar.

A signature cocktail, the rosemary spritzer, seems pink in the romantic low light of the bar. Orange liqueur, in fact, gives the prosecco and ginger base its infusion of colour, and perched on top is a fresh spring of the namesake herb. The result is an amazing nose that lingers until the drink hits bottom.

"It's no wonder Venetians love rosemary," proclaims the bar menu. "Not only has it been used to flavor wines since the Middle Ages, it was also one of the herbs and spices that helped Venice prosper during the spice trade in the 13th century."

Such lore pervades the menu: "Loved by the Venetians, Greeks and Romans, artichoke is rich in antioxidants," the drinks list says of the vegetable used in making mojitos, while the Venetian martini "takes you back in time to the days of the spice trade" with its inclusion of saffron and anise.

The surroundings of the bacaro are just as evocative of Venice's heyday. Giacomo Marzotto, co-founder of Sepa with Gerald Li of Catalunya, put down a terrazzo floor made with tiny marble fragments for the requisite palatial effect.

The wine rack evokes mooring poles used in the city of canals, while the gold and silver Venetian masks that hang overhead come from the generations-old Bluemoon Venice workshop.

One can't help looking at the door for the arrival of the medieval glitterati－a Borgia or a Medici, perhaps－in search of refreshment.

In Venice, many dishes famously display the region's early seafaring contact with the Muslim world.

In pesce de saor, fish－often sardines, sometimes mackerel－is marinated for days in layers of onions, white-wine vinegar, pinenuts and raisins, and the caramelized onions and raisins give the fish an unexpected sweetness despite the vinegary base.

At Sepa, the presentation-conscious food would please any Venetian prince. Beetroot tartare and tuna with Jerusalem artichoke sauce is as pretty as a picture, each little globe of creamy goodness coated with a fresh, bright-red beetroot jelly.

Among the mains, the namesake sepa with black cuttlefish ink is a savory delight, though Venetian-style fried salt cod is a bit dry.

We'd seen local reviewers rave about the ravioli filled with veal cheek and Parmigiano-Reggiano cheese, butter and thyme. But for our non-seafood main we opted for crispy veal cheek with rosemary potatoes, wolfing down every bite. Eggplant, served modern style with parmigiano, is also a winner.

The menu finishes strong on sweets, with a popular tiramisu, a semifreddo and green-apple sorbet, and a double-chocolate cake with mango sauce.

We chose the semifreddo and the house-made ricotta cake with vanilla ice cream, with its not-so-sweet cheese but luscious creaminess. That was a delight paired with Italian coffee.