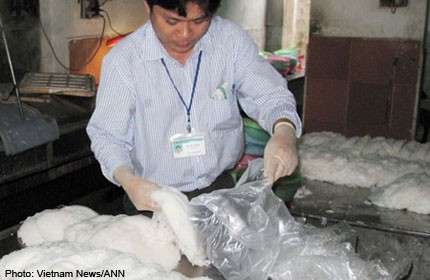 VIETNAM - The HCM City Department of Industry and Trade has fined three producers of fresh rice noodles for using banned chemicals as well as excessive levels of additives.

The three, whose names were also listed on the department's website, are Hoang Thanh and Phuong Dung, household businesses in Districts 6 and Go Vap, and Cat Tuong Ltd Co in Go Vap.

The Food Safety and Hygiene Division has been taking samples from various noodles makers in the city for testing since the beginning of the year, and discovered the three using banned substances.

Tinopal, an optical brightener used in papermaking, detergents and other cleaning agents, was detected in samples of rice vermicelli taken from Hoang Thanh and Phuong Dung.

Hoang Thanh also used excessive sodium sulfite, which is permitted to be used in limited quantities in food processing.

The two were fined a total of VND63 million (S$3,780) for violating food safety and hygiene regulations.

One sample of rice sticks from Cat Tuong tested positive for oxalic acid, a chemical substance banned in food processing.

The fine slapped on the company has not been disclosed.

The department has so far tested 166 samples from 200 establishments.