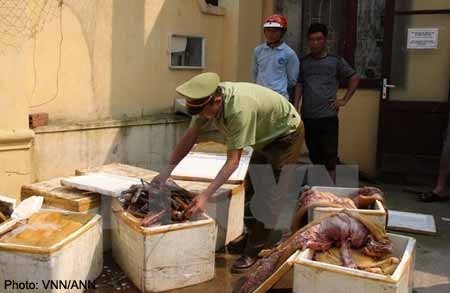 HANOI - The transport police, in co-ordination with the market management department in the northern province Thanh Hoa, have seized a truck carrying 650kg of contaminated pork.

The truck, with the number plate 18N-154, was on Tuesday reportedly transporting the meat without valid papers to southern provinces.

The owner of the cargo was identified as Pham Van Cuong, who lives in Hai Tay Commune in Nam Dinh Province's Hai Hau District.

The relevant agencies have filed a report, and have fined the owner of the cargo VND24 million (S$1,540).

The meat was later destroyed by the market management department.