Which restaurant has the best lobster roll in Singapore 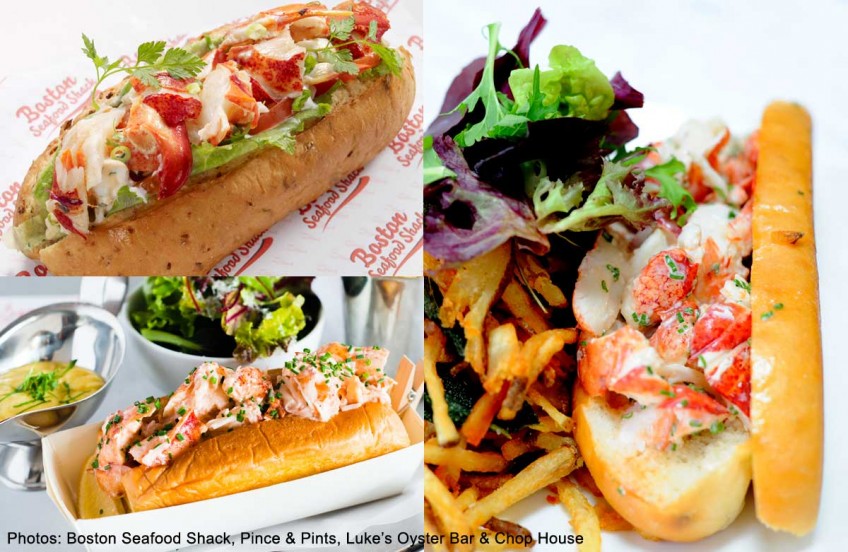 An ideal bread-to-lobster ratio is just one of the criteria setting apart the good from the middling. We taste-test rolls from nine different restaurants across Singapore

Pince and Pints may be late to the lobster party, but brings with it the most buzz. And for good reason. It's the priciest of the lot at $48, but each generously portioned roll holds about 160g of meat from a whole 600-650g lobster, which is shipped in live from the United States and Canada to a proprietary holding facility in Bedok. Large chunks of steamed lobster meat are tossed in a barely-there dressing made of mayonnaise, salt and pepper that really lets the succulence of the meat take centrestage.

The white bread buns are custom-made by a traditional bakery in Chinatown and soaked in butter, then pan-fried till golden yellow and glistening for an indulgent, aromatic and satisfying bite. You have the option to further dress up your roll with a side of garlic aioli, made from scratch in-house by mixing slow-cooked garlic confit with butter. Quality comes at a price at Pince and Pints, but you won't leave feeling like you were short-changed.

Only the Homarus Americanus or American lobster species from a sustainable fishery in Canada is used at this year-old diner in Telok Ayer, which won us over with their textbook-perfect lobster meat. The meat - tender with just enough springiness - from a whole 500g lobster goes into one roll, with both claws left whole and prominently displayed as testament to that. The lobsters are first steamed, then coated lightly with mayonnaise tinged with pommery mustard to cut through the richness. The buns are charcoal-grilled locally made brioche made even more sumptuous with a dab of clarified butter. Request for the counter dining seats by the live lobster tank to watch the hardy crustaceans play-fight each other for extra dinner entertainment.

The lobster rolls at this Louisiana seafood boil specialist are scarce - only 15 are served per weekday and they are on a rotating specials menu on weekends - so order them when you can, because they offer the most value-for-money. Instead of the traditional rectangular buns, The Cajun Kings's rolls comprise a brioche burger bun overflowing at the edges with hefty hunks of various lobster parts, including the flavourful knuckle and lesser-used leg meat. Their 600g American lobsters are imported live from Maine and Canada, boiled with Cajun spices, then cooled and drizzled with clarified butter, which enhances the meat's natural milky sweetness without obscuring it.

The buns are made by local bakery, The Bread Table, and toasted on a butter-coated cast-iron pan before being brushed with home-made mayonnaise. Whoever said that lobster rolls were just a snack will probably have to eat their words - if they have any stomach space left after this belly-filling variant.

Maine lobsters typically weighing 500g are used in the lobster rolls at Luke's, which are served only at lunch. The rolls here have the perfect bread-to-lobster meat ratio, which means you get just enough of both in one mouthful to not let one outshine the other.

And thankfully so: The lobster meat are tossed in a light aioli with a citrusy kick and comes in smaller, more palatable chunks here - particularly for female diners - so they don't end up sliding off onto the plate with each bite. The house-baked buns that encases them are so wonderfully fluffy, we want to buy them home for breakfast. Standards across both outlets are inconsistent, however. On our first visit to the Gemmill outlet, our lobster roll was visually dwarfed next to a twice-as-large mound of fries sloppily heaped on the plate, but a return visit to the Robinsons outlet yielded a more elegantly plated version with a lighter aioli dressing. For its higher price and smaller portion relative to the others though, we would probably save this for the occasional treat.

Another Louisiana-inspired seafood boil restaurant, family-oriented The Dancing Crab sends out their lobster rolls in pairs. The fragrant, buttery home-made bread rolls are far smaller than those at other eateries and are only half filled with lobster meat. We'd rather the meat be served in one roll instead so we don't get mouthfuls of mostly bread. No fault with the meat here - the Boston lobsters are perfectly steamed with just enough bite - but unfortunately their flavour is only discernible after you get through their tangy pale orange home-made aioli.

Who knew that a restaurant that prides itself on serving gourmet hawker food in an elegantly restored heritage building would also have decidedly American lobster rolls on its menu too? Half a Boston lobster of 700-800g in size goes into each roll served at this three-month-old hotel lobby-restaurant.

The butter-poached lobster meat coated in a thin, white film of home-made mayonnaise yielded more sweetness compared to the others, but had a gummy, undercooked texture in some parts. The house-baked brioche buns were quite dense, and could do probably with a swipe more butter. In all, a satisfactory affair probably designed for the homesick American tourist, but not one to make a special trip to the restaurant for.

This no-frills eatery in Far East Square serves customisable food boxes at lunch and morphs into a casual seafood eatery specialising in lobster and sea urchin by night. About 100g of sous-vide cooked lobster meat from American lobsters from Massachusetts and Japanese spiny lobsters goes into one roll. Straggly, slightly mushy orange leg meat and small shreds of unidentifiable parts made up most of our roll, and its flavour was overpowered in both the regular mayonnaise and the hollandaise dressed versions.

The white buns are baked in Platypus's central kitchen in the East, swiped in brown butter and grilled behind an open salad bar counter upon your order. You can customise your lobster roll with nine different dressings, including mayo-free options for the calorie-conscious, or add other "luxe" toppings such as summer truffle (S$5), lumpfish caviar (S$4) and sea urchin cream (S$7). Big eaters can opt for a double portion of meat in their rolls for S$15. The salad bar-style flexibility keeps things fun for big groups of diners, and the affordability makes it an easy place to return to, but snooty lobster connoisseurs should probably steer clear.

Part of the Creative Eateries group, Boston Seafood Shack at the Star Vista shopping mall is a cheap and cheery space designed to resemble one of many seafood shacks that dot Boston Harbour. At S$14, their Premium Lobstah Roll is the cheapest of the range available in Singapore, but there is also a catch: the lobster roll stuffing comprises a 50:50 mix of lobster meat and local crayfish pre-cooked at the group's Fremantle Seafood Market outlet in Clarke Quay. The untoasted buns are light and airy, like your supermarket-variety, commercially baked hot dog buns, and came stuffed with tomatoes, lettuce, diced onions, a smidge of snot green-coloured herb butter and a peppy Thousand Island-like dressing. A you-get-what-you-pay-for budget option - if you don't mind the marketing misnomer.

The Pelican's generously sized portion of both buns and bright orange nuggets of lobster meat set the bar high with a winning first impression. But it soon turns into a reminder of why people hardly have lobsters at home - they're so easy to overcook, as this seafood eatery, unfortunately, did on a recent visit, resulting in large, rubbery chunks of meat that make one quietly mourn the lobster that died in vain.

Their lobsters from the Atlantic coast of the US and Canada are steamed and then heavily coated with a sweetly scented though too-salty bearnaise-coloured tarragon-and-dijon dressing, and the butter-swiped hot dog buns from a supplier had the tough chewiness of bread that had been re-heated in the microwave.

This article was first published on July 19, 2014.
Get The Business Times for more stories.