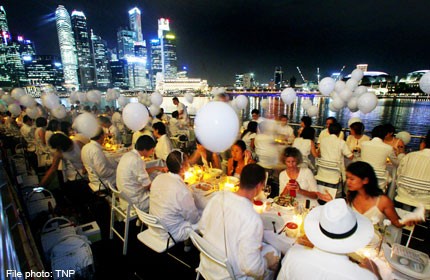 SINGAPORE - Singapore's Diner en Blanc, or the White Dinner, a fancy pop-up picnic that attracted controversy when it debuted here last year, will be back on Oct 18.

Diners are free to bring any cuisine, including local dishes, to a secret venue that will be announced only on the day. But fast food is discouraged.

Singapore is the first Asian country to host a Diner en Blanc, in which guests dress in white and bring their own picnic tables, food and drinks.

Such picnics, which started in Paris 25 years ago, are now held in 20 cities worldwide, including New York.

Last year's event here was marred by a public relations fiasco which was sparked when invited blogger Daniel Ang posted about how he was told that no local food could be taken to the picnic.

The 35-year-old, along with other bloggers, was later "uninvited" by organisers. That caused an uproar, with Mr Ang and other Singaporeans questioning if the organisers thought that local fare was not posh enough.

Clarifying the issue for this year's three-hour event, Mr Chiang said: "Local food should be included. What is not encouraged is fast food, which goes against the multiple-course meal concept of the event."

Addressing critics, the private investor, 39, added: "Bear in mind that we are comprised of many volunteers and are working hard to bring this event to Singapore."

He also apologised to diners several times in the e-mail interview with The Straits Times, calling the entire issue last year a "miscommunication".

"The impression that local food wasn't welcome rightly upset many people... We listened to it all (the feedback), took a deep breath and got on with hosting a great event," he said.

Each diner paid $25 for last year's event. This time, it will cost $30 to $40. The fee pays for rental for buses to ferry guests to the picnic location, electricity and security.

Mr Allan Lim, 41, is on the waiting list, with his wife and a couple of friends.

The owner of a biofuels company is thinking of bringing local cuisine like chicken rice, kueh pie tee and tau huay.

"We may prepare some ourselves or buy some. Local hawker food also tends to fare better when cold," he said.

When contacted, food blogger Ang said of last year's controversy: "It was a small incident that was blown out of proportion. I am happy the event didn't fail and is coming back."

He has not received an invitation for this year's event, but is unlikely to attend the event even if he did, he said.

"After last year, people kept remembering me as the Diner en Blanc blogger. It's something I don't want to be associated with any longer."

Participants of last year's dinner get an invite allowing them to register first, along with close friends of the organisation. These people can in turn recommend friends for registration.