Is Yole worth queuing for?

You probably know by now that the new yoghurt chain Yole pulled a LiHo move and seamlessly replaced its predecessor, Llao Llao early this December.

We'd usually be pretty excited to try a new food trend, but before we dug our shiny blue spoon into the yoghurt, we couldn't help but notice that the two yoghurt chains have a lot of similarities, to the point of unoriginality.

For instance, both Yole and Llao Llao have an uncannily similar looking signature dish, the Sanum and Ibiza, both of which are yoghurt parfaits loaded with sauce, fruits, and 'crunch'. 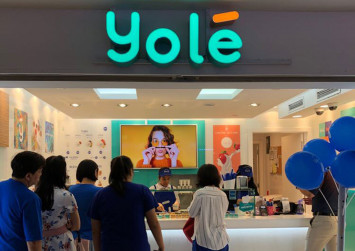 Both have a similar colour scheme and aesthetic, just that Llao Llao signature lime green has been taken over by a bright peacock blue.

Even the basic sizes are priced the same and are called the same thing (Small, Medium and Large), save for the smallest size Petitllao, which is now called Baby.

And it doesn't end there. Nearly all the toppings are exactly the same, though Yole will bring new ones to the table each week. And in terms of taste? It's pretty similar too.

There are subtleties to the flavour and texture though. Yole is a little tangier, and just a tad icier in texture, whereas Llao Llao tastes milkier and is slightly creamier in texture. We're not complaining though, as it is frozen yoghurt, and not milky, creamy ice cream.

We did like a couple of things about Yole though.

For one, it smells amazing, like sweet honey and milk combined. Though that might have just been the loads of white sauce that we were served. They completely drenched ours with the stuff, to the point that the cup was literally dripping.

They certainly don't stinge on sauces and crunchy toppings. In fact, they doled out so much that we think it'd be difficult to finish an Ibiza all by yourself unless you're a serious sweet tooth.

If you like healthier tasting flavours, just get a small one with some granola or pumpkin seeds on the side. Instant bliss.

You'll definitely enjoy a cup of Yole if you enjoy Llao Llao, but don't keep high expectations, as it doesn't stand out that much from Llao Llao. But we hope to see cool new flavours and toppings being added real soon.