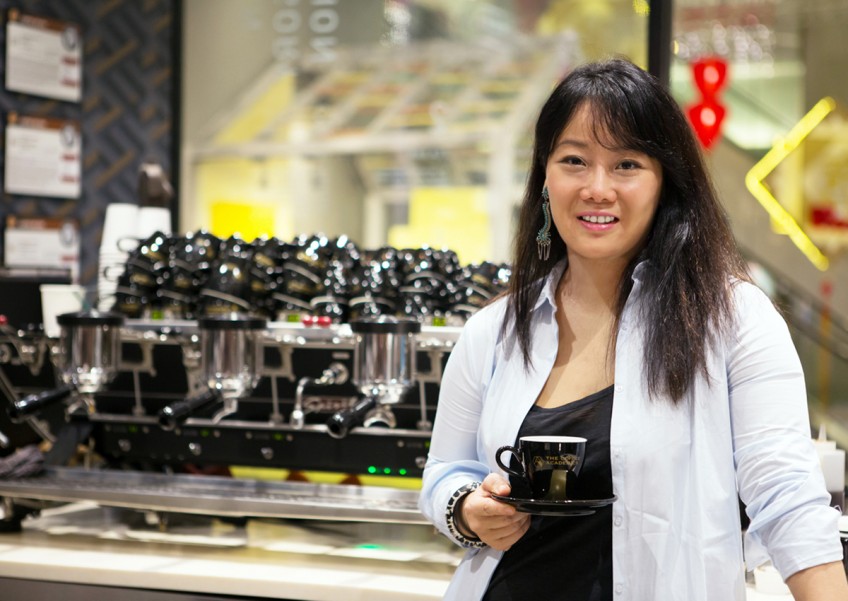 Growing up, Jennifer Liu saw her busy banker father, who ran Chong Hing Bank in Hong Kong, only on Sundays. He would take her to his favourite haunt, Cheung Hing Coffee Shop in Happy Valley.

When she was seven, she had her first sip of coffee. Her father pushed his cup towards her and told her that she was old enough to try something different from her regular order of milk.

Now 40, the founder of Hong Kong-based speciality coffee store The Coffee Academics says: "It tasted bitter at first with a sweet and memorable aftertaste and it was a symbolic moment in those special bonding sessions with my father."

Her love for coffee deepened out of necessity when she had to pull all-nighters as an architecture undergraduate at Cornell University in New York.

Despite a budding interest in coffee, she worked as an architect for two years in New York and Hong Kong before starting a real estate website in 1999, PropertyPortal.com, which collated information and photos of apartments for rent.

The website was sold a year later for a sum she declines to reveal.

Sitting on a pile of cash, she started Caffe Habitu, serving European-style coffee. Her business has since expanded: She has three cafe brands with 30 outlets and they have an annual turnover of HK$400 million (S$72 million).

Now, she is expanding The Coffee Academics, having opened its first overseas outlet in Scotts Square here last December. The 3,000 sq ft cafe offers more than 30 single origin coffee beans sourced from 15 countries, including Panama, where the company owns a coffee farm in Barufee estate.

She says she "fell in love with the food and people" here during her frequent trips to Singapore with her ex-boyfriend, who is Singaporean, for almost a decade in the noughties.

Liu, who is single, has a brother, 37, who is involved in their family's property and banking businesses.

She says: "To me, coffee is not black. It is colourful as it represents history and collaborations between different groups of people around the world that go into creating a cuppa."

What is your favourite coffee bean?

I like peaberry coffee beans from Nyeri, Kenya, which is used in the JWF Blend (a customised coffee blend). They have a fine, delicate taste with soothing notes of honey.

What is your favourite way of brewing coffee?

I like ice-drip coffee. Its long brewing process with purified water gives it a crisp taste. I drink it from a wine glass, so I can appreciate the aroma.

What are your favourite Singapore foods and where would you go to eat them?

I like the laksa from Four Seasons Hotel Singapore, where I often stay. The gravy is very aromatic with lemongrass and fresh coconut milk. I also like Hainanese chicken rice from Boon Tong Kee and Five Star Hainanese Chicken Rice shops.

What are your must-buys when you are in town?

What are your favourite eateries in Hong Kong?

Cheung Hing Coffee Shop in Happy Valley. I love its yuanyang, a drink made with coffee and milk tea, and preserved vegetables and pork with instant noodles.

I also like Luk Yu Teahouse in Central for its Cantonese soups such as doubled-boiled pig's lungs and dried cabbage with freshly ground almond cream.

What are your favourite food destinations?

I like the cafes in Sydney and Melbourne. They use freshly roasted coffee beans and fresh produce in their dishes. Do you cook at home?I love cooking spaghetti vongole and curries such as Thai red duck curry with lychee and pineapple.

If you could choose anyone around the world to have a meal with, who would that be? Taiwan's president-elect Tsai Ing- wen. We are from the same university. I want to find out how she balances her personal life with a public career.

This article was first published on February 14, 2016.
Get a copy of The Straits Times or go to straitstimes.com for more stories.