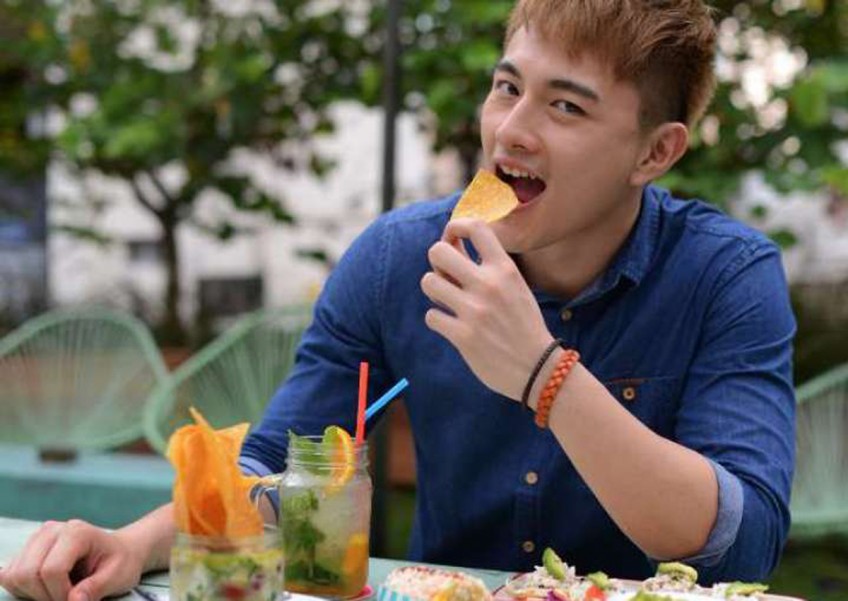 Looking at the lean physique of actor-host Shane Pow, it is hard to imagine that the heart-throb was once a pudgy kid.

In Woodlands Primary School, he was overweight and joined the Trim and Fit club, which organised exercise sessions for overweight pupils.

He says he had a voracious appetite. His mother and aunt, who are great home cooks, would urge him to eat more and to finish his food. So he would often be the last to leave the dining table.

"I was a very fat and round kid," he says. "As I was not picky about food, I became a glutton who would eat anything."

One of his fondest memories is of massive Chinese New Year feasts cooked by his aunts. "You need to be strategic when picking a seat," he quips. "I am always close to my favourite dishes, such as braised pork belly with black moss."

He has an elder sister who is 31. His father, who is 56, owns a logistics company and his 50-year-old mother is a housewife.

It was only in Primary 6, when he joined the school's basketball club, that he started to shed the weight. He was part of the national youth team for three years before a ligament injury forced him to quit the sport at age 17.

After joining Manhunt Singapore in 2011, the Ngee Ann Polytechnic mass communication graduate was talent-scouted and became a Mediacorp artist.

The 25-year-old bachelor is now one of the television station's "Eight Dukes", a new generation of young hunks. He will be performing at Celebrate 2016, a star-studded New Year countdown concert at The Float @ Marina Bay on Thursday. Other performers include American pop-rock singer, Adam Lambert and rapper TheLionCityBoy.

Despite being a foodie, Pow has to stay in shape for filming. He says: "It gets more difficult during the festive season. If I have a dinner gathering, I would not eat so much for breakfast and lunch."

Besides dieting, the 1.78m-tall hunk, who weighs 71kg, also hits the gym and does Muay Thai training three times a week.

How do you cope with cravings when you are on a strict diet?

I munch on baby food, such as banana or blueberry-flavoured snack puffs, as they are low in fat, sugar and calories. They work especially well when I have a craving for potato chips and I'm itching to bite into something.

When I was on a diet in the lead up to Manhunt, I ate plain chicken breast while flipping through a mall directory booklet of restaurants and planning what to eat after the competition.

How have your eating habits changed since you became an actor?

I avoid eating carbohydrates after 5pm. When I eat dinner at home, I eat only dishes without rice. I make my own meals while preparing for a drama role. I have six to eight slices of wholemeal bread and boiled or grilled chicken breast with cayenne pepper.

What are your favourite Singapore foods and where do you go to eat them?

I also like the fried Hokkien mee in ABC Brickworks Market & Food Centre as the thin noodles come in a nice wet version. And chicken rice from AFE Delights Hainanese Boneless Chicken Rice stall in Woodlands Street 21 as the rice is more oily and flavourful and the chicken breast is soft and tender.

What are your favourite cuisines?

I love Mexican food. I like to have nachos with cheese, avocado and salsa while watching movies. I go to Lucha Loco in Duxton Hill for dishes such as Baja Fish, which is crispy fried fish with chilli mango salsa, and Carnitas, which is pork belly with cilantro mayo, jicama and avocado.

I also like Korean barbecue and fried chicken from places such as Chicken Up in Tanjong Pagar Road. I am hooked on its soya sauce fried chicken.

What is the most memorable meal you have had overseas?

Pad thai from a street-side hawker in Pattaya, Thailand. The springy noodles are full of wok hei and come with so many ingredients, such as prawns and chicken. It cost only 50 baht (S$2). My friends and I ate it every day when we were there on a six-day holiday.

Yes, I tried fermented camel milk in Mongolia while filming a travelogue earlier this year. It was sour and had an ammonia-like smell. I prefer fermented horse milk as it is milder.

What is the most interesting place that you have taken a woman on a date?

The Botanic Gardens. I took my ex-girlfriend for a picnic there. I made a lot of sushi, such as California hand rolls, maki rolls and onigiri. I learnt how to make them from my aunt, who works in a Japanese restaurant.

If you could choose anyone to have a meal with, who would it be?

Actress Mila Kunis, as I have watched her shows such as That '70s Show. She is pretty and smart.

I was impressed by how she spoke in Russian at a press conference for the movie Friends With Benefits.

Celebrate 2016 is on at The Float @ Marina Bay on Thursday, from 8pm till late. Tickets cost $38 to $168 from Sistic (excludes booking fee). Go to toggle.sg/celebrate2016 for more information.

This article was first published on December 27, 2015.
Get a copy of The Straits Times or go to straitstimes.com for more stories.