Foodie Confidential: Eating in the spotlight 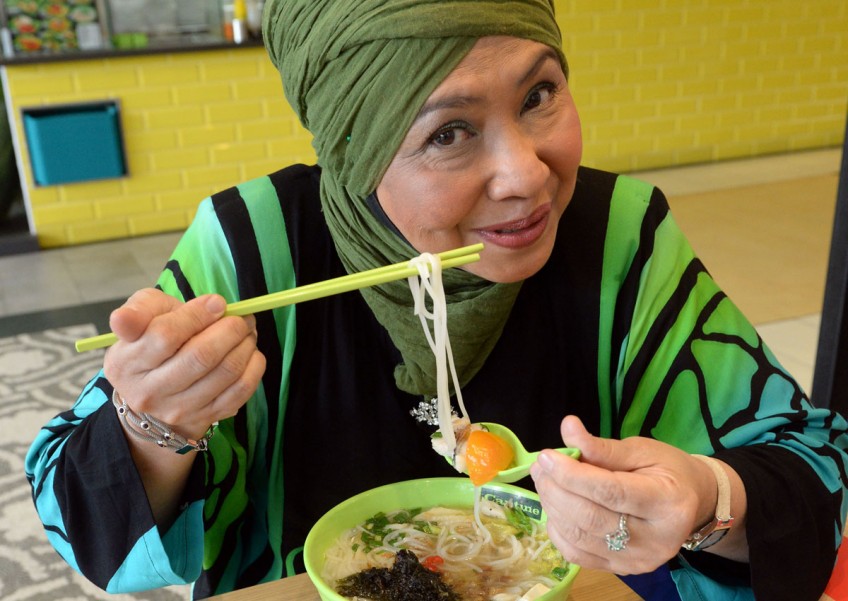 Veteran Malay singer Rahimah Rahim gets recognised whenever she dines out.

In hawker centres, stall owners greet her and give her more food. Sometimes, customers offer to pay for her meals. The vivacious 59-year-old says: "I feel paiseh, but they do it as they have enjoyed my songs and performances over the years." Paiseh is Chinese dialect for "embarassed"

With the attention that she gets, the star would rather spare her dining companions the extra fuss and dine in.

For lunch, Rahimah, who works full-time as an administrative assistant in a law firm in Raffles Place, usually gets her colleagues to pack meals, such as fish soup noodles and curry puff, from nearby coffee shops.

For dinner, her younger daughter, Ms Amalyn Aisha, 20, a polytechnic student, sometimes buys food for her on the way back to their four-room Housing Board flat in Yishun.

Ms Amalyn is Rahimah's daughter with her second husband, Mr Remy Taib, 58, who works in the finance industry.

She says: "Once in a while, I go to Newton Circus Food Centre for seafood with my colleagues. They are used to people coming up to chat with me during our meals."

Indeed, when Life spoke to the bubbly star over a bowl of sliced fish soup noodles at Cantine food court in Northpoint Shopping Centre, the interview was interrupted by fans four times.

Each time, Rahimah cheerfully obliged the photo-taking requests and chatted with the fans.

She stars in the Royston Tan film, 3688, which is about a parking warden who aspires to be a singer. The film opened earlier this month. She plays a strict but fun-loving "queen of carpark attendants".

She cracks up when she shares her experiences of receiving traffic fines - including a $1,500 one in the 1980s. She explains: "The fine accumulated. I had no time to pay it as I was travelling. When I attended the court hearing, the judge read out my name, gave me a look of recognition and read out the fine."

The eldest of four siblings, Rahimah was one of Singapore's most prolific singers in the 1980s. Her late parents were well-known local singer Rahim Hamid and Malay film actress Mariam Baharum.

She made her television debut when she was six years old and has released 12 albums, held sold-out concerts and starred in TV shows.

In 1988, she divorced former national footballer, Mohamed Noh Hussein, 61, an Islamic studies teacher. They have a daughter, Ms Nur Hida Pearl, 37, a legal secretary. The grandmother of three says: "I cannot sit still. If I stay at home, I will start rearranging the furniture."

Growing up, what are your fondest memories of food?

When I was a child, my father often took the family to East Coast Lagoon Food Village. After eating, we would go to the beach.

I miss the Indian mee rebus from a street hawker in Farrer Park. Its thick gravy tastes different from the mee rebus cooked by the Malays. I also miss the rojak sold in Waterloo Street.

What is your eating style?

I can eat one type of food repeatedly. When I performed overseas for many years, I had a bowl of chicken kway teow soup for dinner every night.

What are your favourite Singapore dishes and where would you go to eat them?

I like the assam pedas at Yusuf & Arni's Cafe in Far East Plaza. It tastes the closest to my mother's version. There's no fishy smell and the thickness of the gravy is just nice.

I go to Islamic Restaurant in North Bridge Road for its nasi briyani and Warong Nasi Pariaman in Kampong Glam for its beef rendang.

I also like Japanese food. I go to Hei Sushi in Bedok Point for dishes such as kitsune udon, smoked unagi, maguro and salmon. There are many halal food options these days.

Is there any food that you avoid eating before performing?

I eat minimally, such as a slice of bread with cheese or fish soup noodles, before a performance. I drink piping hot water. I love eating durians. When I am not performing, I can eat five durians at one go.

When I was younger, I was more willing to try new food. I tried fried frog leg in Jakarta, Indonesia, in my late 20s, thinking it was chicken.

I have also tried ostrich meat in a restaurant in the Singapore Zoo and horse meat in Malaysia.

What was the most memorable meal you had overseas?

I had churros while I was on holiday in Cordoba, Spain, three years ago. It was so fresh and fragrant and it had a cinnamon taste. I cannot find the same taste of churros here.

I cook on special occasions, such as Hari Raya celebrations. I make dishes such as rendang keluak (beef rendang with Indonesian black nut) and lontong. I cook for my family and Chinese friends who look forward to coming over for meals.

Sometimes, I cook dishes such as nasi potato and ayam masak merah.

If you could choose anyone to have a meal with, who would that be?

My late parents, I miss them. My father liked having home-cooked meals with the family. One of my last memories of him was of him eating fish briyani in the hospital. It is a sad memory.

My mum was a good cook. I learnt to cook dishes such as rendang keluak and assam pedas from her.

This article was first published on September 27, 2015.
Get a copy of The Straits Times or go to straitstimes.com for more stories.