Foodie Confidential: Have wine will travel 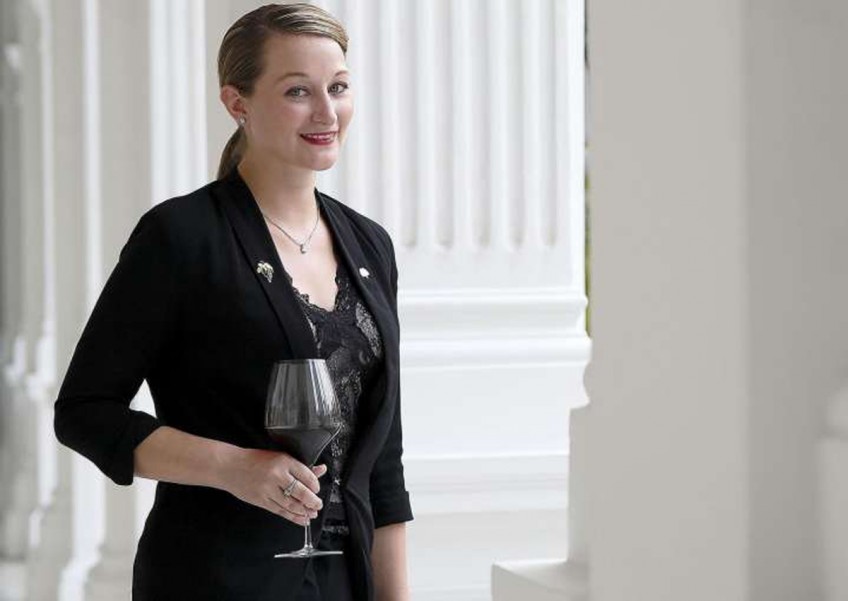 Until six years ago, Ms Stephanie Rigourd did not know where Singapore was and had not even stepped into an airport.

Then 22, she was head sommelier of one-Michelin-starred French- Japanese restaurant Le Charlemagne in Burgundy, France.

An executive from Hilton Hotels & Resorts dined at the restaurant and later offered her a job in Singapore.

Despite not speaking a word of English, she decided to pack her bags and relocate halfway across the world to work here.

She started out as a sommelier at the now-defunct Harbour Grill & Oyster Bar at Hilton Singapore before becoming the hotel's head sommelier.

"I come from a family that isn't well-travelled," says Ms Rigourd, who grew up in the countryside near Valence in south-eastern France.

"Coming to Singapore was the best decision that I have made as it changed my life on a level that I would never have imagined."

Now 28, she is wine director at Raffles Singapore and heads its wine programme, which includes monthly Wine Apprentice classes and Thirsty Thursdays, a themed, blind-tasting session which introduces new wines paired with food.

These days, she is fluent in English, which she mastered within six months here, and even uses some Singlish words in conversation.

While chatting with The Sunday Times, she describes how drinking wine can be seen as "ya ya papaya" - a Singlish phrase for showing off.

On her days off, she enjoys checking out the melting pot of cuisines with her boyfriend and they enjoy Japanese, Thai, Korean and Indian food.

From an early age, she was brought up to think that "any meal without wine is known as breakfast".

Her father, a 63-year-old retired car mechanic, fed her Brittany biscuits dipped in red wine and she remembers licking wine off her fingers when she was two years old.

Ms Rigourd, the older of two daughters, graduated from hospitality school, Tain l'Hermitage Hotel School in the Rhone Valley, with a sommelier diploma.

What's the first drink you order when you sit down for a meal?

Champagne served in a wine glass.

What are your favourite Singapore foods and where would you go to eat them?

One of the first dishes I tried here was chicken rice from Boon Tong Kee in River Valley Road and I especially like the chilli garlic sauce as it has an umami flavour and the dish goes nicely with Chardonnay.

I also like New Ubin Seafood in Sin Ming Road. It has a fantastic wine list and proper glassware. I always order the crispy squid and kailan in oyster sauce.

What is your favourite food and wine pairing?

I love pairing Peking duck with crepes from Jade Palace Seafood Restaurant in Forum The Shopping Mall with a glass of Gevrey-Chambertin, a red wine from Burgundy.

The wine's crispness matches the duck's skin, the tannins in the wine are softened by the duck fat and the freshness of the wine cleans up the heaviness of the crepes.

What is your favourite French restaurant here?

Nicolas Le Restaurant in Teck Lim Road is such a cosy place and the food is value-for-money. I like its magret de canard (seared duck breast) and wine selection.

What are your favourite Asian cuisines?

I like Indian food, such as mutton masala and the yogurt onion appetiser from Gayatri Restaurant in Race Course Road, and Japanese food. I like having nori maki for breakfast and other dishes such as shabu shabu, tempura, sashimi and sushi. I go to Chikuwa Tei in Mohamed Sultan Road for them.

What are your must-eats when you return to France?

I must have my dad's fantastic potato salad, which is made with anchovies, eggs, onions, oil and vinegar. He always waits for me at the airport with a baguette, salted butter and saucisson (cured French sausages). I also pick up croissants.

What is the best dining experience you've had?

It was my first dining experience in a Michelin-starred restaurant, Les Cedres in Granges-les-Beaumont, in south-eastern France, when I was 18.

My friend and I saved up for months for the meal. I remember it for its great dining atmosphere and attention to diners.

We had dishes such as duck carpaccio, with poached foie gras and black truffle, and pigeon pate.

I am still learning to cook as my dad told me the best way to keep a man is to make his tummy full. I am trying French dishes such as petit farcis (baked meats and vegetable stuffed in tomatoes).

If you could choose anyone to have a meal with, who would that be?

My dad. Although I call him once every two days, I still have so many things to tell him.

This article was first published on December 6, 2015.
Get a copy of The Straits Times or go to straitstimes.com for more stories.